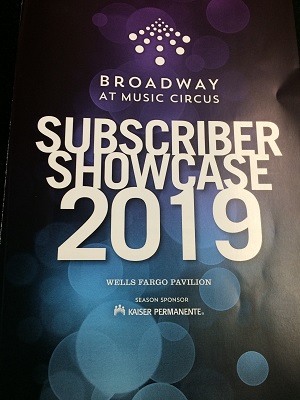 Director Glenn Casale introduced the performers, adding pertinent information on their background – including whether they had performed at Broadway at Music Circus previously or were newcomers.

On tap in 2019 at Broadway at Music Circus are a combination of new shows and old classics:

I am especially looking forward to seeing Shrek the Musical, The Wiz and In The Heights.

The performers were accompanied by Benet Braun on the piano.

All of the performers have extensive past credits.  All have played Broadway and/or regional theatre, been part of one or more national tours, and some additionally have TV credits.

Each of the six are very talented – but I wanted to note in particular Jennifer Leigh Warren who credited Broadway at Music Circus for jumpstarting her career.  The actress/singer recently appeared in “RENT:LIVE” on FOX TV where she showcased both her acting and singing talent.

As my friend and I left the Wells Fargo Pavilion after the show I remarked on the range and strong voices of the performers.  I also shared that it had appeared to me each of them were trying to “out-sing” or “out-perform” the others.  Guess what?  The same thought had occurred to us both!

Comments on the 2019 Broadway at Music Circus Subscriber Showcase?

If you attended – what did you think of the talent showcased that day?