You are here: Home / Arts & Entertainment / Adrian Legg In Concert 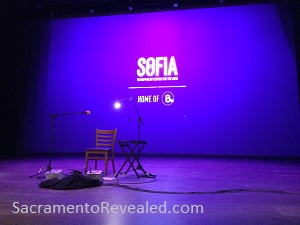 Description and review of a recent Adrian Legg acoustic guitar concert at the B Street Theatre at the Sofia in Midtown Sacramento.

Who is Adrian Legg?  He is a very accomplished British acoustic guitarist who has been called “impossible to categorize”. After attending a recent Adrian Legg concert I can understand why.

Watching and listening to Legg, a resident of London, was a most enjoyable way to spend the evening.  He has a unique fingerstyle way of playing, and his music spans a variety of styles.

I was very interested to observe Legg, during one song in particular, continually “tuning” the strings of his guitar.  Researching Legg afterwards, I learned that he is well known for using this technique to create his “signature sound”.

My research also revealed that Legg is much more than an accomplished musician. As I read the list of his endeavors and accomplishments it became evident to me that while I may not have been familiar with him all serious guitar players likely would be.

Legg is a musician and storyteller, sharing with the audience what he was thinking and feeling when he composed a particular song.  His storytelling included personal stories of his life that were sprinkled with wry observations on a variety of topics – many of which resulted in a smile and/or chuckle of appreciation from the audience.

At one point I asked my friend if she would describe his wit as a “dry” and she instead suggested that “British” would be a better description.  I agreed.

Legg has released numerous albums over the last 40+ years which I understand include his commentary and the stories behind the songs that he performs – an added bonus in my opinion.

Did you catch the recent Adrian Legg concert?  If you are familiar with Adrian Legg, what would you add?