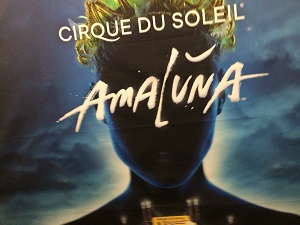 Description and review of the Cirque Du Soleil performance of Amaluna under the Big Top in West Sacramento.  Note – Performance dates extended to March 1, 2020.

Four friends and I recently attended a mid-week Cirque Du Soleil performance of Amaluna.  All five of us were excited to see Amaluna under the Big Top. This was only my second Cirque Du Soleil experience.

It was mid-week, and we had absolutely no trouble parking a short distance from the entrance of the venue.  The Big Top is located in the parking lot towards the back of Sutter Health Park (formerly Raley Field) in West Sacramento.  Parking is $15 (cash or credit card).

Inside the tent various stations are set up – food, drink and Amaluna-related merchandise.

The food offerings were similar to what you would find in a movie theater (popcorn, candy, etc.).  I did not take particular note of the cost of either food or beverages – but I can tell you that I paid $6 for a bottle of water.

There were a respectable number of porta potties lined up outside of the tent to one side.  As a general rule I am no fan of porta potties, but they were both clean and flushable. I did note that they seemed to be smaller (width and depth) than one might be used to. There were also very nice hand-washing stations set up nearby. 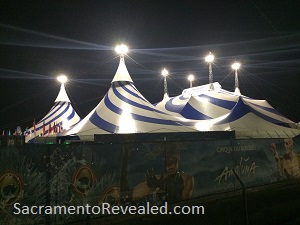 The production of Amaluna is reportedly the first time in 18 years that a Cirque Du Soleil Big Top production has come to Sacramento.

The stripped tent was impressive as we approached the venue.  The interior was more spacious than I had thought it would be, but at the same time the venue was intimate. Finding our seats was no problem as our tickets listed door, section, row and seat.

I did not know what to expect, so I wore both a vest and a jacket to make sure that I was not uncomfortably cold.  That, as it turns out, was not a problem – the tent was heated.  I placed my jacket on the back of my chair and was comfortable throughout the performance.

The Big Top is theatre-in-the-round – so visibility was not an issue.    Additionally, the stage was rotated during a number of scenes allowing everyone to view the performers from different angles.

We had second row seats – so we were very close to the action!  Our seats were comfortable, and as it turned out they were more spacious than the majority of the other seats which appeared to be quite narrow.

Speaking of those other seats – we were surprised at the number of unoccupied seats throughout the Big Top that evening.  Perhaps because it was mid-week?

Amaluna was reportedly inspired by William Shakespeare’s The Tempest.  The action takes place on the island of Amaluna, an island ruled by goddesses.  During a storm a group of men are washed ashore.  The Queen’s daughter Miranda, who has just had her coming of age ceremony, falls in love with one of the young men. Will their love survive the trials to come?

The music accompanying the performance was beautiful and at times otherworldly.  It definitely set the mood for the various acts.  I should also note that all of the musicians were female – very appropriate given the story and plot.

The accompanying vocals of the songstress were outstanding throughout.  What a beautiful and powerful voice!

Happily, the acoustics in the Big Top were great – which added greatly to our enjoyment of the performance. 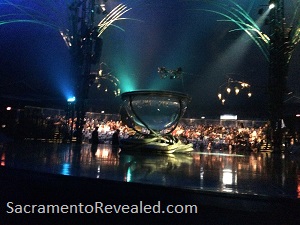 From start to finish the performers had the audience in the palms of their hands.  The special effects and the feats of strength, dexterity and agility were amazing.

The cast was predominately female.

One of the acts that stood out to me was one in which the performer utilized her toes to pick up quite long pieces of what appeared to be some type of shaped wood, and proceeded to slowly build a large mobile held together by gravity.  What a demonstration of skill and balance! 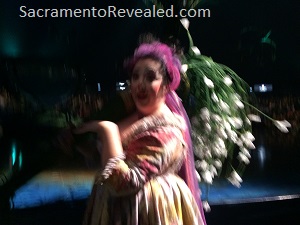 Kelsey Custard, a California native with close Sacramento connections, is a professional clown who plays an important role in Amaluna.

She and a cohort start the show with various antics, catching the attention and interest of the audience.  Throughout the show, when there is a lull as equipment or scenery is changed, she and an accomplice distract and amuse the audience until the performance resumes.

Custard has an impressive resume of performing as a clown, with stints in the theater, film and television.  She earned her BA in Theater at U.C. Santa Cruz and graduated from the Clown Conservatory in San Francisco.