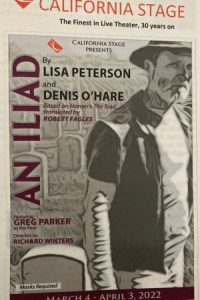 Description and review of An Iliad, by Lisa Peterson and Denis O’Hare, currently playing at the California Stage Theater.

A small group of Renaissance Society members met on a recent Sunday in the R25 Arts Complex Courtyard prior to the 2:00 p.m. start of An Iliad at the California Stage Theater.  It was a beautiful sunny day, and we had a bit over an hour to enjoy beverages and nibbles prior to the performance.  It was nice to have an opportunity to get better acquainted with and/or meet new members.

We also had the opportunity to meet and chat with Ray Tatar who is the Artistic Director of California Stage.

I hate to admit it – but this was the first time I attended a play at California Stage.  It will not, however, be the last!

A Bit About California Stage

California Stage is a non-profit theater company “…dedicated to encouraging arts created by California artists.”  And, works presented are chosen to “…reflect a California state of mind.”  Additionally, California Stage strives to “…present high quality work that explores issues of importance to Californians.”

The entrance to the California Stage Theater is on R Street adjacent to the railroad tracks.  Look for the red door. 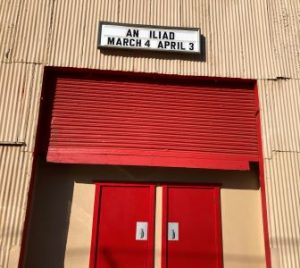 According to the California Stage Theater website, the theater seats 99 comfortably.  Past the small lobby is the theatre entrance.  The seating is to the left and the stage is to the right.  As you enter you will notice that several chairs in the front row are piled high with blankets for patrons to use to help keep warm – a very thoughtful touch!

The California Stage Theater reminds me of the old B Street Theatre, when it was actually located on B Street, before it built and moved into its new digs on Capitol Avenue.  Additionally, it reminds of the Celebration Arts Theatre which took over what had been the old B Street Children’s Theatre.

Ray Tater, the Artistic Director, made a few comments prior to the performance.  Among other things, he mentioned that the California Stage Theater is celebrating its 30th Anniversary this season.  Also noted was that An Iliad is the first California Stage production in 2 ½ years due to the COVID-19 pandemic.

You are doubtless somewhat familiar with Homer’s The Iliad, an epic poem written thousands of years ago. The Iliad tells the story of the Trojan War, nine years into and towards the end of the conflict.

As you may recall the Trojan War was sparked by Paris, the son of King Priam of Troy, who kidnapped the beautiful Helen from Menelaus, a Greek and brother of Agamemnon, King of Mycenae.

A thousand Greek ships were launched to bring her home – it was a matter of honor.

An Iliad features local actor Greg Parker as the Poet.  It is a one-man show.

The Poet tells the story as one who is personally familiar with the people and events that took place – Achilles and Hector, Agamemnon and Patroclus, and the interference of the Greek Gods of Old into the affairs of man.

Woven into the story by the Poet are more recent events up to the present day.  Let’s face it – humankind has not really changed.  A long litany of the many conflicts over the ages since that time, up to and including Ukraine, proves the point.

Human emotions including pride, greed, fear, love, rage, anger, and hate continue to take their toll.  An Iliad shines a bright light on the horrors of war.

Greg Parker was compelling in his role as the Poet.  He put incredible energy and emotion into his performance as both the Poet and other key individuals as he brought the past to life.

The set is minimal, but was used very effectively.

An Iliad is 90 minutes long with no intermission.  As Parker walked off the stage, I was sure that he must be both physically and mentally exhausted.  Although just an observer, I too felt a form of exhaustion as a result of the intensity of the story and his performance.

Afterwards, members of our group compared notes.  All were unanimous in praise for both the actor and the manner in which the strands of the ancient past and current day had been woven together.

To sum up, An Iliad is highly recommended.  It is playing at Capitol Stage through April 3, 2022.

Greg Parker, in the An Iliad program, describes himself: “I have been the stereotypical artist who waits tables, tends a bar, or works as a technician just to be close to the world of theater. All of those side jobs, hustles, and gigs have shaped me into the person I am today”.

Comments on An Iliad?

If you have had the opportunity to see the performance: What was your reaction to An Iliad?