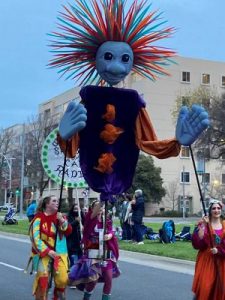 Description and review of the City of Trees Mardi Gras Parade, a fun family-friendly event held in Downtown and Old Sacramento.

A friend and I headed to the Downtown Sacramento Capitol Mall this past Saturday to check out the inaugural City of Trees Mardi Gras Parade.  The event was organized by The Curiosity Collaborative (formerly March for Science Sacramento) along with Krewe of Trees volunteers.  The idea behind the parade is to showcase Sacramento’s culturally diverse performance and art communities.

The parade was scheduled to take place from 5:00 p.m. to 7:00 p.m., starting on Capitol Mall and 6th Street and ending on 2nd Street in Old Sacramento.

We settled on a comfortable bench two blocks from where the floats and participants were being staged in front of the west steps of the State Capitol building.  Other spectators had brought low lawn chairs and/or blankets and settled on the grass next to the street.

Food trucks and porta-potties were set up in the vicinity, and additional vendors and their food carts made their way up and down the sidewalk serving hungry patrons. 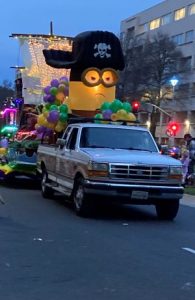 The parade did not actually start until closer to 5:30 p.m.  Once the Sacramento Police Department had established the necessary street closures the parade began to make its way down Capitol Mall.

One complication – the light rail train bisected the beginning of the parade route.  Once each segment of the parade had passed that hurdle, they were in the clear and reformed the next block over from where we were sitting.  I imagine this was in order to make a grand entrance into Old Sacramento.

Many of the floats, etc. featured lights, and once the sun set a bit before 6:00 p.m. the lights really added to the show.  Reportedly, there was approximately 600 participants in the parade. 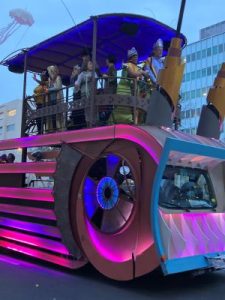 All in all, I thought the City of Trees Mardi Gras Parade was as impressive first effort!  Congrats to the organizers.

Checking out the Curiosity Collective website, I came across one of the funding sources for the parade that I thought worthy of mention for future reference.

A $100 tax deductible donation allowed one to march with the costumed Krewe of Trees volunteers, throw beads, and join in the afterparty in Old Sacramento (a $20 value).

To sum up, planning is already underway for next year!  Stay tuned.

Comments on the City of Trees Mardi Gras Parade?

If you attended the parade, what would you add?  What was your experience?