(UPDATED 7/8/2020) Description of an art exhibit at clayARTstudio814, located in East Sacramento.

clayARTstudio814 is a private studio housing a number of artists.  It is not open to the public unless there is an “event”.  There are no regular business hours – so you will want to check out their website for the dates and times for the next open studio if you want to drop by. 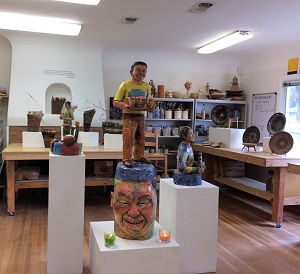 I had been interested in checking out clayARTstudio814 since I first read about its opening last year.  The studio owner, artist Marsha Schindler, also conducts workshops and classes at the studio.

The studio exterior stands out and sets the tone for the artwork contained within.  The walls of the interior are painted a neutral white – which allows the artwork to shine.

While I was at the studio a couple of the resident artists were at work and they took the time to say hello and answer questions.

There is also a very attractive small back and side yard with places to sit and artwork on exhibit.  I expect that when there is an opening reception on a nice summer evening that the outside space will be very popular.  I don’t know about you, but I tend to get a bit nervous standing around in a crowded space surrounded by breakable art.

I wandered out back as I had spotted outside one of the windows two “bumblebees” hovering as if in flight.  The whimsical creatures were crafted by Schindler.

I don’t have an artistic bone in my body – but may at some point take a class at clayARTstudio814.  It would be fun – and who knows – with the right teacher I might craft a work-of-art I am proud to display!

I had hoped to chat with Schindler while I was there – but she was otherwise occupied.  Next time.

Have you had the opportunity to visit clayARTstudio814?

Subscribe to SacramentoRevealed.com to receive the weekly (with an occasional hiaatus) newsletter direct to your inbox!  Comments are welcome.