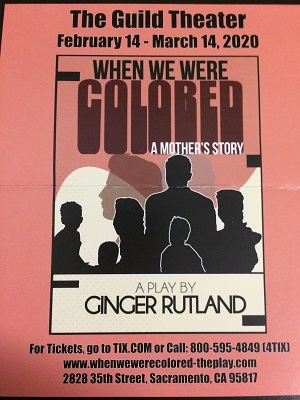 Interview with Playwright Ginger Rutland about her play, When We Were Colored, A Mother’s Story.

Ginger Rutland adapted her mother’s memoir, When We Were Colored, A Mother’s Story, into a play with the same title.  The play premiered in Sacramento in Spring 2019 at the Sacramento Theatre Company (STC).

After attending a talk by Ginger about her mother’s book, I purchased a copy and very much enjoyed Eva’s memoir which described their family life as a middle-class black family living in Sacramento.  I also attended the premier of Ginger’s play at the STC.

I was thrilled to learn that Ginger was bringing When We Were Colored, A Mother’s Story back to Sacramento!  The play opens at the Guild Theater in Oak Park on February 14, 2020.   It will run through March 14.

First Ginger, I want to thank you for agreeing to be interviewed about your play When We Were Colored, A Mother’s Story.

SR: What was behind your decision to bring your play back to Sacramento in the year following its premier?

GR: The premier was a huge success at the Sacramento Theatre Company last Spring, selling out most performances and breaking box office records. Because it sold out, many people who wanted to see it were unable to get tickets. That’s a big reason I decided to remount the play.

SR: Did you have a particular reason you chose to produce the play at the Guild Theater in Oak Park?

GR: Because of widespread and government sanctioned housing discrimination. When my family came to Sacramento in 1952, Oak Park was one of the few neighborhoods where blacks and other people of color could buy homes. It’s where we went to church, socialized and shopped. For decades Oak Park has been in decline but it is in the middle of a renaissance with new businesses, new restaurants and new housing. The beautifully restored Guild is part of the rebirth of this neighborhood and I’m proud to be a part of it.

SR:  Have you made any adjustments or changes to the play since it first premiered?  If so, what might I notice that will be different?

GR: Because the venue at the Sacramento Theatre Company was very small, the play was by necessity minimalist, with little in the way of sets or furniture. The Guild has a much more expansive stage. We’ve engaged Shawn Weinsheink, a set design professor from Sacramento City College, who has designed a spectacular set for the play.

In addition, the music will be different and more robust than the STC production.  My director, Stephen Eich, a theater veteran with Broadway credits, has returned to direct and help produce this new staging.  Also, I’ve done some slight rewriting to center the play in Oak Park.

SR:  I understand that as far as the cast goes that some actors are returning to play their same characters, and others are new to the production.  I also understand that the actress playing your mother, Eva, is someone special.  What can you tell me about the cast?

GR: I’m thrilled that my niece, Chelsea Carbaugh-Rutland, will play the central role of Eva, my mother and her grandmother. Chelsea grew up in Sacramento and graduated from Natomas Charter, Performing and Fine Arts Academy. She’s been working as an actress in Los Angeles for several years and is thrilled to be playing her grandmother.

Brooklynn Solomon, an accomplished local actress is returning to play Ginger, me, in the production. Also returning Elizabeth Springett will play a multitude of ensemble characters and Abisola Forrester will play me as a little girl my daughter Eva.

Newcomers to this production are Tarig Elsiddig who will play Bill and Ben Muller will play a variety of ensemble roles. It is a very talented cast and I am grateful that they have agreed to take on this play of mine.

SR:  Is there anything else you can add that you believe would be of interest to attendees?

GR: I think it’s important for audiences to know that this play is not the usual black narrative of suffering and anger. Yes – I do touch on discrimination that blacks faced here in Sacramento and elsewhere in this country, but the play is about an ordinary black family living through extraordinary times. It’s both poignant and funny and in the end, triumphant.

SR:  Thank you Ginger Rutland for sharing!  I very much look forward to attending the upcoming production of When We Were Colored, A Mother’s Story.  I already have my ticket!

When We Were Colored, A Mother’s Story Snapshot: