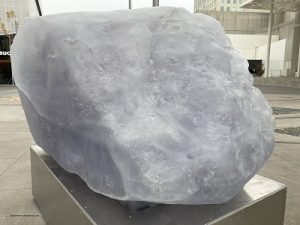 Description of Lunar Specimen 12038,7, a new addition to Sacramento’s collection of public art.

Jiayi Young is an Associate Professor of Design at the University of California, Davis. She has published and exhibited both nationally and internationally.

The sculpture is made of a clear acrylic resin that is modeled after the shape of a moon rock brought back from the 1969 Apollo I2 moon landing.  It’s dimensions are 6 ½ feet x 5 feet x 8 feet.

The sculpture is lit from within and the glow is synchronized with the light spectrum of the moon.  As such, it echoes the phases of the moon varying in intensity with the seasons.

The sculpture also has a sound component.  If one puts an ear to the surface of the sculpture recorded sounds from outer space can be heard.

I have had the opportunity to view Lunar Specimen 12038,7 during both the day and at night after a performance at the SAFE Credit Union Performing Arts Center.  The glow at night definitely adds additional visual interest to the artwork.

As for the sound component, I did not hear any sounds emanating from it when I put my ear to it.  It was, however, during the day and there was considerable background noise as convention attendees made their way in and out of the convention center.  I will try again when the Plaza is less busy and report back.

Lunar Specimen 12037,7 is a subsample of Apollo Lunar Sample 12038’s original parent rock that was collected on the Moon.  Every subsample that is broken or cut from the parent rock is provided with a child number – in this case “,7”.

Apollo Lunar Sample 12038, the parent rock, was collected during Apollo 12’s second EVA by Astronauts Charles “Pete” Conrad and Alan Bean.  It was found along the edge of Bench Crater in the Ocean of Storms.

Like the other samples found at the site, 12038 is a basalt.  However, it is the only feldspathic basalt found during the Apollo missions thus it is something of a mystery.  It is a unique basalt whose origin is uncertain.  It is dated to be between 3.28 to 3.35 billion years old.