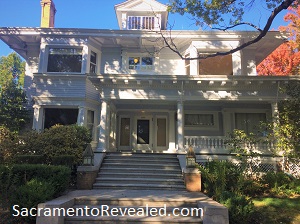 (Last Updated 6/1/2022) Notable Sacramentans – Joan Didion, the internationally celebrated author, was born in and spent most of her childhood in Sacramento.  Didion died on December 23, 2021 at the age of 87. See “Updates” below for more information.

The Didion House, located in the Poverty Ridge neighborhood, was Joan Didion’s  home during her last two years of high school.

In early November I joined approximately 85 other members of the Sacramento Historical Society on a Saturday morning tour of the Didion House.  Also on tour that morning was the Ella K. McClatchy Library.  The Didion House is located at 2000 22nd Street, and the former home of the McClatchy family, now a City of Sacramento branch library, is located just down the street.

Due to the large number of sign-ups for the tour we were broken up into two groups.  One group began the tour at the Ella K. McClatchy Library, while the other group started at the Didion House. Prior to the tour organizers shared a few facts about the two homes and the neighborhood.

During the pre-tour briefing attendees were provided with a copy of an old City of Sacramento map depicting the path of the flood waters during the Great Flood of 1861-1862.  Of particular note – Poverty Ridge, situated on high ground, was spared the ravages of the flood that devastated the City.

The exterior of the substantial home is most attractive.  I particularly liked the wraparound porch. The realtor one-page report I picked up describes the style of the house as Craftsman/Traditional.

Built in 1911, the 4 bedroom/4 bathroom (2 full/2 half), 4,639 square-foot house (not including the full sized basement) was home to celebrated author and Sacramento-native Joan Didion during her last two years of high school.

Tour attendees had the opportunity to take their time and wander throughout the beautiful three-story house and its basement.  The house is impressive – with gleaming red fir wood paneling and decorative embellishments such as the pillar shown below.  The flooring is a combination of oak hardwood floors and tile. 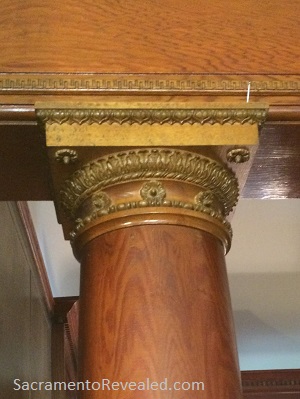 The living room has a fireplace, and both the den and dining room feature ornate ceilings.  Several of the rooms have simulated (but realistic looking) leather wallpaper.  I could not resist touching it!

The house has been tastefully updated, while maintaining the original charm.  Updated rooms include the kitchen and bathrooms.  The third floor has built-in home theater equipment – including a ceiling projector and a pull down screen. 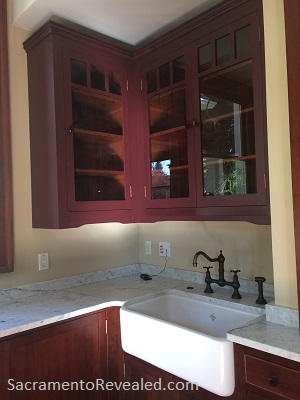 While the house appears to be very well maintained, I could not help thinking that its upkeep would be costly – not to mention the cost of utilities!  But then, I expect that anyone who purchases this special house will have the wherewithal to do it justice.

Didion was born and raised in Sacramento, except for a few years during World War II.  During that time the family moved to be close to her father who served in the Army Air Corps. 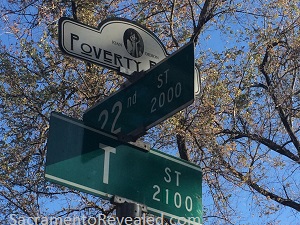 It was during her junior and senior years at McClatchy High School that Didion lived in the home on 22nd and T Streets.  After graduating from high school in 1952 she went on to attend the University of California, Berkeley.

Didion has won numerous awards for her work.  She won the National Book Award for The Year of Magical Thinking, a memoir detailing her struggle with grief caused by the unexpected death of her husband, writer John Gregory Dunne, and the illness of their adopted daughter Quintana Roo.

Among her other honors, she was given the National Humanities Metal by then-President Obama.

In 2014, the novelist/essayist/screenwriter was inducted into the California Hall of Fame by then-Governor Jerry Brown.

More recently, a quote by Joan Didion was prominently featured in the 2017 film Lady Bird.

“Anybody who talks about California hedonism has never spent a Christmas in Sacramento.”

The coming-of-age comedy-drama was written and directed by another Sacramento native – Greta Gerwig.

When conducting research on Joan Didion for this blog post I discovered that there is a documentary film about Didion’s life on Netflix.  Joan Didion: The Center Will Not Hold is now on my must watch list!

(12/26/2021)  Joan Didion died at her home on December 23, 2021 at the age of 87.  Much has been written about her since her death in the media as the world remembers both her and her work.  Following is both her obituary and a few of the many articles and tributes:  Legacy.com and The Sacramento Bee and The Sacramento Bee  and National Public Radio and AP News  and New York Post  and The Guardian

(1/30/2021)  Joan Didion’s most recent book, Let Me Tell You What I Mean, was released on January 26, 2021.  The book contains 12 Didion essays, all written between 1968 and 2000.  The essays provide a glimpse into the mind of the renowned author who has been called the voice of her generation.  Didion turned 86 this past December.

The topics of the essays are varied – from not getting into Stanford (On Being Unchosen by the College of One’s Choice) to her musings on writing (Why I Write).

Comments on Joan Didion and/or the Didion House?

Do you have a favorite Joan Didion book?  Are you familiar with the Didion House?  What would you add to the description?