The Crocker Art Museum (Crocker) is celebrating the 100th birthday of Wayne Thiebaud with an exhibit of 100 of his works.  The exhibit runs through January 3, 2021. Thiebaud is one of Sacramento’s most famous artists.

Similar to other public venues, the Crocker had been closed since March due to the COVID-19 pandemic.  I was therefore thrilled that it re-opened in time for this special event!  The exhibit had been in the works for some time, and I had been looking forward to it.

Naturally, special COVID-19 precautions are in place.  Visitors must wear masks and timed tickets, purchased on-line, are required for admittance.  Attendees are limited to 25% of capacity.

I was very comfortable when attending the exhibit.  All attendees were courteous, and everyone maintained an appropriate distance as we each made our way around the main exhibit hall and the adjoining hallway.  If I was unable to get close enough to read the accompanying information about a particular work, I just moved on and later returned to it when I made a second pass. 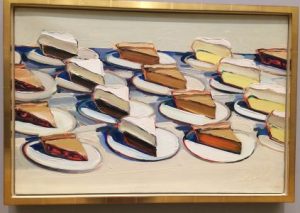 On October 15, I attended the “Members Only” preview of the Thiebaud exhibit.

Did you know that the Crocker hosted his first solo museum showing in 1951?  Since that time the Crocker has made it a tradition to do so once every decade.  This particular exhibit is extra special as many of the artworks have never before been shown publicly.

The works of art in the exhibit were created from 1947 to 2019 – over more than 70 years!  It was fascinating to see how the artist and his art evolved over time.  And, Thiebaud is still painting and playing tennis!

Over the years Thiebaud created his artwork utilizing every possible medium – oils, pencil and ink drawings, etchings, prints, watercolors, pastels, etc.  The works on display range from small pen and ink sketches on paper to large oil paintings on canvas.

It was in the early 1960s that Thiebaud first made a name for himself.  During this period he created a series depicting a variety of “comfort foods”.  Well known examples of his work include Pies, Pies, Pies (1961) and Boston Cremes (1962). 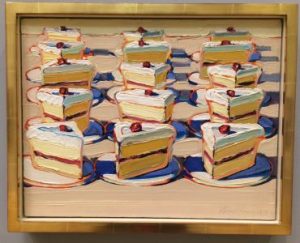 His timing was right – it was the dawn of “Pop Art”.  Note:  While his work is often lumped in with Pop Art many experts disagree, instead describing his art as “figurative realism”.

Thiebaud is known for his attention to detail, as well as his brushwork and use of color.  I find it fascinating that the majority of his works are created from memory.

Some of his “series” are:

While Thiebaud generally paints from memory, he makes an exception when it comes to the human figure. 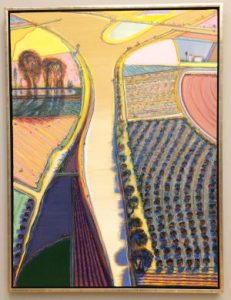 If you follow my blog, you may be aware that I have a fondness for landscapes.  For years I had a large Wayne Thiebaud print, Flatland River (1997) (San Francisco Museum of Modern Art) hanging in my office at work.  I never got tired of looking to it. 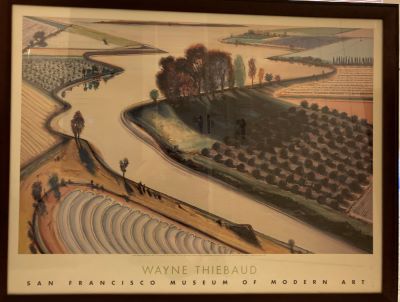 When I retired the print was given to me as a gift, and it is now hanging on a wall in my home.  I did not know until recently that the original was painted from memory, thus it does not represent a specific location or place.  No matter, I know my print was inspired by the Sacramento—San Joaquin Delta and I still enjoy it every day!

The exhibit includes a wide variety of “everyday objects”, such as a pair of dress shoes and a hat rack festooned with hats.  Thiebaud is also known for painting in multiples, lining up similar objects in rows.  The exhibit features, for example, artwork depicting rows of: bow ties, candied apples and lipsticks.

I finished my rounds of the exhibit viewing a handful of paintings from one of his more recent series – clowns.

I read not that long ago that Thiebaud, reaching back into his childhood memories, had started the clown series during the last five or so years.  Having also noticed that an exhibit of the clown series was to be shown at the Laguna Art Museum during the same timeframe as the Crocker exhibit, I did not expect to see clowns that day.  I was therefore pleasantly surprised to view several examples from the series, including Bumping Clowns (2016).

Lastly, are you hesitant to or unable to view the Wayne Thiebaud exhibit in person?  The Crocker Art Museum has you covered!  The exhibition Wayne Thiebaud 100: Paintings, Prints, and Drawings can be viewed online in the comfort of your home.

(5/16/2022) The Crocker Art Museum is bringing back the Wayne Thiebaud exhibition this summer as it was cut short by the COVID-19 pandemic after opening in 2020.  The encore includes 18 new works!

(12/27/2021)  Wayne Thiebaud died on December 25, 2021 at the age of 101 at his Lank Park home in Sacramento.  Following are a few of the articles written about Thiebaud, his life and his artwork: Sacramento Bee and New York Times  and NPR.

Comments on Wayne Thiebaud and/or the Crocker Art Museum exhibit?

Do you have a favorite Thiebaud work of art or series of paintings?