You are here: Home / Arts & Entertainment / Popcorn Falls at B Street Theatre 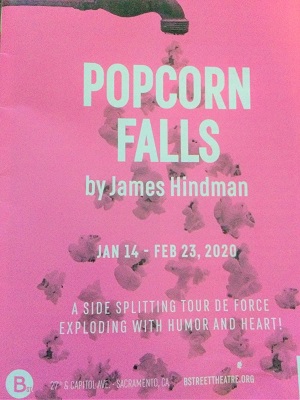 Description and review of Popcorn Falls, now playing at the B Street Theatre at the Sofia through February 23, 2020.

Each season the B Street Theatre produces what I think of as a “silly” or “zany” play that sometimes (but not always) is both silly/zany and funny.  Popcorn Falls falls into this category.

The small town of Popcorn Falls is in danger of disappearing off the face of the earth.  The towns only tourist attraction has dried up – and so has the tourist trade that has kept the town afloat.

Bankruptcy looms, and the only hope to prevent the town from being bulldozed and a sewage treatment plant built in its place is to (drum roll) secure grant funding by putting on a play in one week!

The dilemma – the townspeople have neither a playhouse nor a play.

B Street Theatre regulars Greg Alexander and Dave Pierini take on the roles of the over 20 residents of Popcorn Falls.  This in itself is a feat – especially considering that it is a one-act play with no intermission!

The two actors showcase their talent in Popcorn Falls, switching characters with a bare minimum of props from one second to the next.  This includes changing gender.

Each of the townspeople portrayed have their quirks, and the two actors utilize body movement, mannerisms and tone of voice so that the audience is never in doubt as to who is who.

During one sequence Alexander and Pierini do a switcheroo playing Becky, the friendly bartender.

I attended the second performance of Popcorn Falls, and what I found most humorous was the whispered prompts each actor gave the other as they changed characters and scenes.

I hope that the two, with more performances under their belt, do not lose this aspect of the performance!

James Hindman is both an actor and playwright.  His credits as an actor include film, television and theater.

His ninth play, Popcorn Falls had its world premiere in January 20, 2017 at the Theatre NOVA in Ann Arbor, Michigan.  Theatre NOVA exclusively produces new plays, operating on a “pay-what-you-can” basis.  It also premiered Off Broadway in October, 2018.

The B Street Theatre at the Sofia program for the production states “…Popcorn Falls hinges on the ongoing notion in the arts community that art can save the world or in this case, a least a small town” and “Hindman has written a love letter to theatre…”.

Have you seen Popcorn Falls?  What would you add to my description?