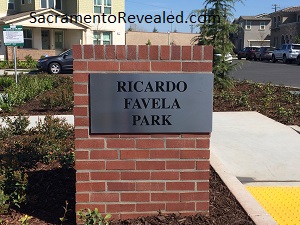 (UPDATED 5/13/2022) Description of the dedication of a park named in honor of Ricardo Favela in the McKinley Village neighborhood of East Sacramento.

A fellow East Sacramento Improvement Association (ESIA) board member and I attended the dedication of the Ricardo Favela Park in McKinley Village on March 5.

Note Added:  The ESIA has a contemporary new name – the East Sacramento Community Association and a new website.  Check it out!

Who was Ricardo Favela?

Ricardo Favela was a Professor of Art at California State University, Sacramento.  An accomplished artist, he was also one of the founders of the Sacramento-based artists collective the Royal Chicano Air Force (RCAF).

Favela was born in Kingsburg in 1945 and grew up in Dinuba.  He attended the College of the Sequoias and then Sacramento State.  At Sacramento State he earned his bachelor’s degree in 1971 and his master’s degree in 1989.  After that, he became a full-time professor in 1997, after a teaching career as a graduate student.

Above all, Favela was known for actively mentoring his students.  In particular, he took a keen interest in students from migrant worker families.  He not only encouraged his students in their art endeavors, he also inspired students to get involved in community issues.

Ricardo Favela was best known for his silk screen posters announcing political rallies, community projects and art events.   He passed away in 2007 at the age of 62.

What is the Royal Chicano Air Force?

The Royal Chicano Air Force (RCAF) was formed in Sacramento in 1969 by a group of Mexican American artists who used art to support social change.  The RCAF was originally known as the Rebel Chicano Art Front.

In addition to other artistic endeavors, RCAF members worked on murals in cities around the state, including numerous murals in Sacramento. 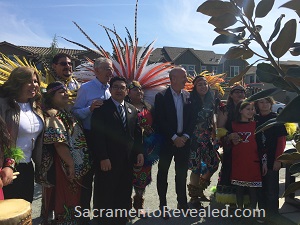 It was a beautiful, unseasonably warm sunny day the morning of the park dedication.  There was a good-sized crowd either seated or milling about waiting for the ceremony to start when we arrived.

We checked out the small park, but what really caught our eye was a group of elaborately dressed Aztec dancers.  The dancers later performed a ceremonial blessing of the park accompanied by a drum.

The park dedication included opening comments by Phil Angelides, and remarks by:

A number of Favela family members were present, and his daughter Florentina spoke of her father and his dedication to the community and keeping Chicano culture alive through art.

Several speakers remarked on his sense of humor for which he was well-known.  For example, it was he who reportedly encouraged the name change to Royal Chicano Air Force after the abbreviation RCAF resulted in confusion by people who thought RCAF stood for the Royal Canadian Air Force.

The 0.13 acre Ricardo Favela Park is located at 3587 Troy Dalton Street, in the northeastern corner of McKinley Village.

The park includes the following amenities: