Description of a recent talk given by artist Richard Jackson at the Crocker Art Museum highlighting works of art created during his decades-long career.

After viewing the exhibition of works of art crafted by Sacramento born-and-bred artist Richard Jackson, I was very interested to learn more about him and his work.  To this end, I recently attended a talk by the artist at the Crocker Art Museum.

Richard Jackson, now in his 80’s, took to the stage and proceeded to share his thoughts on art accompanied by a slideshow of many of his works crafted over the last 50 years.  His talk was very entertaining.  He discussed both his art and his philosophy on art.

The driving force behind Jackson was obvious – he is always looking for a way to change painting and to make it more interesting.

He did not mince any words when he said he “hates minimalism” and does not agree with “less is more” when it comes to art.  He does not “believe in contemporary art”, which in his opinion often utilizes inferior materials.

He sees his view of art as the “modern way of thinking” about art.  He also see art as temporary, and when asked says he does not care what happens to his collective works once he passes.

To say that Jackson “thinks big” is an understatement – many of his works of art are (or were) significantly larger than life.  When invited to exhibit he often, for example, created artwork to fit the specific site.

While he mentioned that occasionally someone would purchase a piece such as a drawing, he more often stated that “no one wanted or bought” his work.  Throughout much of his career he largely supported himself working construction, and pursued his art before and after work and on weekends.

He made mention, however, that his artwork was “good for public spaces” – and he has shown his work all around the world.  He pointedly added that he has never been invited back a second time after an exhibit.  The reason?  He stated that all museums have a “floor fetish” and they were always concerned that he would get paint on the floor and/or walls of the museum.

I can understand why museums might feel concerned.  Many of his Jackson’s works are designed to spray or leak paint once activated. For example, a number of his artworks in the slideshow utilized fans or other means to fling paint in all directions. It is by this means that the “painting” is created – hence use of “alleged paintings” in the title of his current exhibit at the Crocker Art Museum.

All of us in the audience that day found it humorous, as he walked us through the hour-long slideshow, that he directed us time and again to “look at the floor” of each museum – all of which were pristine and shiny. As he told it, he often had to bring his own floor to the exhibit.

Jackson has a very hands-on approach to art, and he is clearly all about the process of making art.  For example, in one work he made 1,000 frames, hand-stretched each canvas, and painted each prior to stacking them on top of each other (face down while still wet) to form a wall.  In a similar work, he did the same with 3,000 paintings stacked in the shape of a sphere. 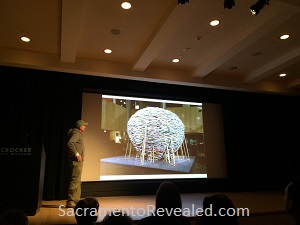 At the age of 50 he conceived the idea of creating a room with ceiling and walls constructed of 1,000 clocks – all marking the same time.  He made each clock (hands, face, mechanism) himself, and installed the wiring to power the clocks.  He wryly observed that $100,000 and 5 years later he completed the project. 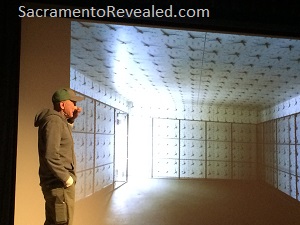 When it comes to art critics, Jackson shared that “critics never like my work, and I don’t like them”.  At one museum exhibit he went so far as to construct a barrier at the door of the exhibit room with a list of the art critics who were to be denied entry.  He acknowledged that he did not know if it did any good.

So it went, with numerous interesting stories about each of his works – and the process of creating them.  All in all I thought it was time well spent and a most enjoyable Sunday afternoon.

Jackson shared that his family has been in the Sacramento area since the 1800’s.  His Italian grandfather’s extensive farm was located on the land now occupied by the City of West Sacramento.

He remembered fondly long summer visits to the farm as a young boy, helping with chores and spending time with his grandfather target shooting and hunting.  He still considers himself a hunter and it is reflected in his art.

He also shared that leaving home is an important part of growing up, and despite his continued fondness for the area he has no regrets moving to the Los Angeles area as doing so was key to the ability for him to pursue his art career.

Comments on Richard Jackson and his “Alleged Paintings”?

Did you view the exhibit?  What comments would you add?