Description of the inaugural Waterfront Days held this past Memorial Day weekend in Old Sacramento.

Sacramento Waterfront Days was held three days over the holiday weekend – Friday through Sunday. The free event featured a variety of period (1849) entertainment including:

Each of the three days there was also performances of a special melodrama titled “The Quest for the Gold Spike”.  The Quest for the Gold Spike was written and directed by a team of California State Railroad Museum staff and members to commemorate the 150th Anniversary of the Transcontinental Railroad.  Local actors and actresses performed the melodrama at the historic Eagle Theatre.

While not part of the Sacramento Waterfront Days event, I noticed quite a few people in line to purchase tickets for the California State Railroad Museum’s excursion railroad – the Sacramento Southern Railroad.  The train ride along the scenic Sacramento River is 45 minutes long.

Later in the day on Friday and Saturday (6:00 p.m. to 10:00 p.m.) Sacramento Waterfront Days changed things up with country music and a beer garden.

Now, if much (but not all) of the featured entertainment sounds similar to another long-standing Sacramento event – Gold Rush Days – it is.

I chatted with two grizzled costumed actors manning a 1849 bar tent (who offered me a sarsaparilla) and they confirmed that Gold Rush Days had been re-christened Waterfront Days.  Additionally, the event was moved from the Labor Day weekend to the Memorial Day weekend.   I think it would be fair to say that they were less than thrilled. 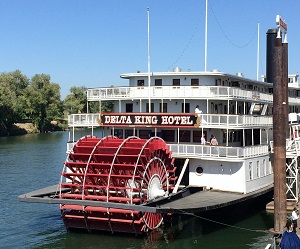 As you may know, the re-branding of Old Sacramento to Old Sacramento Waterfront by the City is intended to broaden the historic district’s appeal – and increase foot traffic by both tourists and locals.

To sum up, I can envision myself in the future routinely referring to the historic district as the Old Sacramento Waterfront.  At the same time, I can understand the dismay expressed about the event name change.