Description and review of the Remembering September 11 – 20th Anniversary Retrospective exhibit by renowned photojournalist Martha Cooper, currently showing at A Space In Between art space/gallery.

The newly opened A Space In Between art space/gallery is hosting the Martha Cooper September 11 – 20th Anniversary Retrospective – its first event!  The new art space is headed up by Sacramento-based artist Lin Fei Fei.  Or, as the young man manning the gallery shared with me when I visited, “she is the boss.”

On the outside wall of A Space in Between on C Street you will find a new September 11 mural crafted by Tats Cru members Bio, BG 183 and Nicer.  The mural by the New York Bronx natives is a “thank you” to the California Urban Search and Rescue Task Force 7 (CA TF-7) for responding in New York’s time of need.

The CA TF-7 is based in Sacramento.  Its members, from Sacramento Area fire agencies, respond to disasters – both natural and manmade.

More than 70 Sacramento Area firefighters and four Canine Search Specialists were on a plane on their way to New York City while all the nation’s commercial flights were grounded.  The CA TF-7 members sent were specialists trained in major building collapses in urban areas.

Martha Cooper is best known for documenting the New York City graffiti scene of the 1970’s and 1980’s.

In 1984, she and Henry Chalfant collaborated on Subway Art, a photo book that has been called the bible of street art.

Martha Cooper has traveled and taken photographs around the world.  In 2019, she was the subject of a documentary, Martha: A Picture Story.  The documentary celebrates her career and contributions to preserving the world of street art.

Check out Martha Cooper’s Instagram Account to see some of her photo’s.  Note the recent photo of a Sacramento Fire Department fire engine.

I stopped by the Martha Cooper exhibit earlier this week.  The exhibit is housed in a cavernous warehouse on the corner of 14th and C Streets in the Mansion Flats Neighborhood of Sacramento. 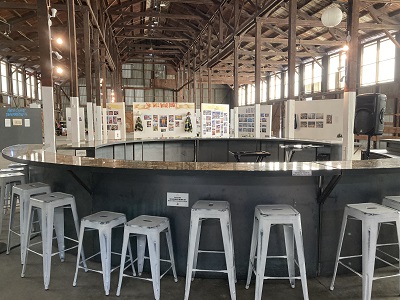 Shortly after 11:00 a.m. I arrived at the warehouse gallery.  After taking a photo of the TATS CRU mural I entered the building.  There were no other patrons there at the time.  Thus, I was able to take my time as I made my way around the exhibit.  I plan to return to view it a second time before it closes on October 11.  There is a lot to absorb.

Among other things, the Remembering September 11 – 20th Anniversary Retrospective documents the public outpouring of sympathy from fellow New Yorkers and others around the nation/globe to comfort the people impacted by the events of the day.  Cooper’s retrospective includes photos of numerous spontaneous memorials that appeared on street corners and elsewhere – places for people to gather, share collective grief, and perhaps say a prayer.

I was especially touched by the exhibit of the “missing” posters posted by family and friends of victims as they desperately sought word about the fate of their loved ones. 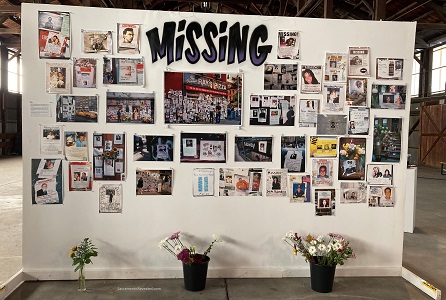 One collection of the photos exhibited was taken by a Sacramento firefighter as she documented CA TF-7’s mission at Ground Zero.  The exhibit also includes gear, such as jackets and helmets, worn by members of CA TF-7 as they searched around the clock for potential survivors, and any remnant or artifact that could help to identify victims. 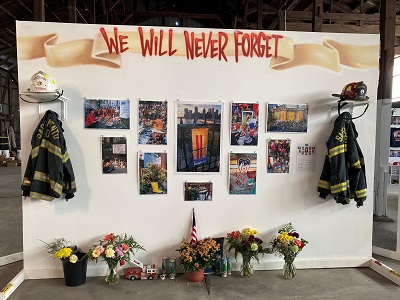 Members of CA TF-7 remained on the job at Ground Zero for approximately two weeks.

Among the other items on exhibit, you will find a yellowing copy of the front section of The New York Times on 9/12.  There is also a Share Your Thoughts exhibit board (with available post-it notes) to share your thoughts if you are so inclined.

The exhibit is a powerful experience and I suggest you visit it if you can.  It is, after all, a milestone event. 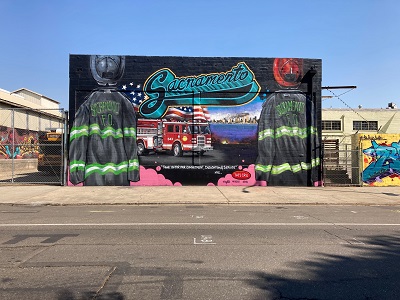 The Tats Cru Mural is one of 2021’s new murals, many still “in progress”, that are part of this years annual Wide Open Walls event.

Under the heading “Sacramento” is the following scene:

In the background to the right are the twin towers post-attack, smoke billowing from the buildings prior to collapse.  In the foreground to the left – a Sacramento fire truck with an American flag above it.

The scene is flanked on each side with a Sacramento Fire Department jacket and helmet.

Written below the scene are the words, “Thank you for your Commitment, Dedication & Service.  NYC.”

About The Artists – Tats Cru Bio, BG 183 and Nicer

Subscribe to SacramentoRevealed.com to receive the weekly) with an occasional hiatus) newsletter direct to your inbox!  Comments are welcome.