You are here: Home / Arts & Entertainment / Stories on Stage 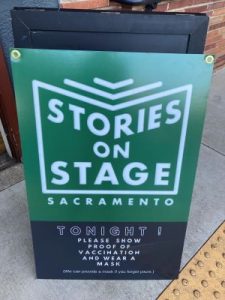 Description and review of Stories on Stage, a literary performance series held at CLARA, the E. Claire Raley Studios for the Performing Arts in Midtown Sacramento.

Two friends and I recently attended Stories on Stage at the E. Claire Raley Studios for the Performing Arts (CLARA).  I had this literary performance series on my “want to do” list for some time – then COVID-19 happened.

Given the improved COVID-19 statistics in Sacramento, and the fact that Stories on Stage Sacramento has appropriate precautions in place (mask required, proof of vaccination, spaced seating) it was finally time to check it out.

CLARA is located at 2420 N Street in Midtown Sacramento.  Stories on Stage events are held in the CLARA Auditorium.  Entry to the auditorium is either via the parking lot or the double doors on 24th Street.

Parking is available in the large parking lot behind the auditorium, entrance on “O” Street.

Wine, beer and water are available for purchase.

About Stories on Stage Sacramento

Stories on Stage Sacramento is a 501 (c) (3).  Donations allow the literary non-profit to bring authors of various genres together with actors who read, with flair, portions of their books on stage.  Tickets are $10 and can be purchased on-line in advance. 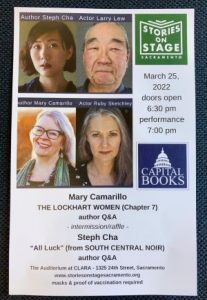 My friends and I arrived a bit after 6:30 p.m. for the 7:00 p.m. performance.  We had purchased tickets in advance on-line, so after showing our proof of vaccination, we checked in.  After our names were checked on the attendee list, we were each given a raffle ticket for the raffle to be held during the intermission.

The authors that evening were Mary Camarillo and Steph Cha.  Camarrilo’s novel, The Lockhart Women, won first place in the Next Generation Indie Award for first fiction.  Steph Cha’s Your House Will Pay won the Los Angeles Times Book Prize and the California Book Award, and the Juniper Song crime trilogy.

Both of the books take place in Los Angeles in the 1990’s.  Events during this timeframe include the Rodney King riots (All The Luck from South Central Noir) and the OJ Simpson trial (The Lockhart Women).

First up that evening was a reading of a chapter from Mary Camarillo’s The Lockhart Women performed by actor Ruby Sketchley.  After that, Camarillo took to the stage to answer questions about her book and what inspired her to write it.

Between the two readings the raffle was held.  There were two winners.  Both were thrilled to receive a book by one of the authors.

Up next was Steph Cha.  Actor Larry Lew read a portion of Cha’s story, “All the Luck” from the anthology South Central Noir.  In the question and answers afterwards, Cha was asked a variety of questions about her books and chosen genre.

During the question and answer period after Lew’s performance, one friend took to his phone and ordered an audio version of one of Cha’s books.   He mentioned afterwards he is always on the lookout for new and interesting crime writers.

To sum up, all three of us agreed that it had been a most pleasant and interesting evening.  Additionally, at $10 per ticket, I would venture to say that Stories on Stage is very reasonably priced entertainment.

Comments on Stories on Stage?

Have you attended Stories on Stage?  What would you add?