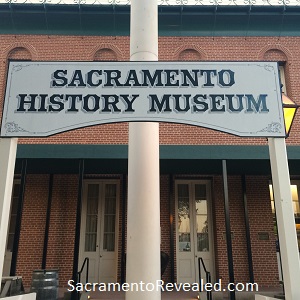 (Last UPDATED 6/7/2022) Description of an entertaining and fun evening on an Underground After Hours Tour in Old Sacramento. Plus, who was Mary McCormick? Mystery solved.

The Underground After Hours Tour requires participants to be 21 years or older. That was not an issue with our group, as the majority of us are retired.  In fact, the oldest member of the class (99 years young) joined us that evening for the half-mile, 90 minute tour.

Why the age restriction?  The evening tours are a peek into the lives of some of the people who lived here and actual events that took place in Sacramento during the Gold Rush era.  Love, gambling, profiteering, cheating, murder, and lynching are all part of their collective stories.

We split up into two groups, one tour starting at 6:00 p.m. and the second at 6:30 p.m.  I joined the first group.  We were provided with head-sets which allowed us all to hear our tour guide “Mary McCormick” clearly as we made our around the streets of Old Sacramento.  Mary was dressed in period clothing and conducted the tour “in character”.

Our group made several stops along the streets of the Old Sacramento Waterfront while Mary described events taking place here during the Gold Rush era.  Woven into her description was what it was like to live here during that time period, and the personal stories of real people who lived here.

As one might expect on a tour given by the Sacramento History Museum, the people and the events described were based on documented history.  That fact made it all the more interesting to me.

Twice we made our way beneath buildings still in use to the original street level.  Mary had mentioned as we went underground that we would notice what she called the “smell of history”.  There was indeed a distinct smell – both earthy and musty.

If you unfamiliar with Sacramento’s past, you may not know that the streets of Sacramento were raised some ten to eighteen feet above the original 1849 elevation in the 1860’s.  Why? This massive undertaking was done in response to the frequent flooding of the Sacramento River.

What had been the first floors of the buildings on the original street level remained in place, creating Sacramento’s “hidden” underground.

On the tour we also saw an original jackscrew, the equipment used to raise buildings – one inch at a time.  It is mind boggling to think of how many jackscrews and men would have been needed to raise a building!

At that same underground location we had the opportunity to view artifacts of personal items that had been excavated on-site.  Mary continued sharing stories of the times and people.  Having had attended a talk a few months earlier by librarian James Scott, I actually recognized a few of the names and stories of those long-ago Sacramento residents.

During the tour one of the underground rooms became a gambling hall.  One of Mary’s assistants (also dressed in period clothing and in character) demonstrated Shut the Box.  Shut the Box was a popular game of the time played with dice and nine numbered tiles.  Several members of our group tried their luck at the game.  Gambling was serious business during the Gold Rush era!

Before exiting the gambling hall we were all treated to a Sarsaparilla.  Have you ever tasted Sarsaparilla?  It tasted like root beer to me.

At the end of the tour we all made our way to the River City Saloon where we handed in our audio equipment.  In exchange, we were given a commemorative shot glass and a coupon for a free Sarsaparilla, one shot of whiskey for $2, or one 16 oz. draft beer for $2 at the River City Saloon.

Our tour guide Mary was a most animated and engaging storyteller who really brought history to life – making the experience both fun and educational.  I can see myself taking the tour again at some point in the future.  I am told that each volunteer tour guide develops the content of their tour, often told from the perspective of the character they are playing.

While channeling her Mary McCormick persona, our tour guide did not explain anything about herself, or I should say, Mary McCormick.  When I inquired at the end of the tour she did make reference to being buried in the Old City Cemetery.  The hunt was on!

Who Was Mary McCormick?

The Sacramento Old City Cemetery has an online inventory of those buried there – so that was my first stop.  But as you might expect, pinpointing the “right” Mary McCormick took a bit more research.

How do I know that I pinpointed the “right” Mary McCormick?  On the Find A Grave website Mary’s page lists the name of her younger sibling/sister Fanny (born Rachael Brown) Hinkley Mills.

According to Find A Grave contributor J. Rubio, Fanny “was accused of shooting Albert Putman in Sacramento, where she operated a house of ill-repute and dance hall, she was also said to have been a madam in New Orleans”.  J. Rubio goes on to add, “She had many names/aliases:  Rachael Brown, Fanny Smith, Fanny Sweet, Fanny Seymour, Fanny Maria Hinkley, Fanny Mills, etc.  There was a huge probate case to determine her identity because she lived a lie most of her life, pretending she came from England.”

(8/7/2020) As a result of the COVID-19 pandemic, the Sacramento History Museum had suspended its in person tours – bus has now restarted restarted them virtually!  You can take a family-friendly Underground Tour online.  A guide will show you the city’s secrets from the convenience of your computer or television screen.

Comments on the Sacramento History Museum Underground After Hours Tour?

Have you taken the Underground After Hours Tour?  What was your experience?