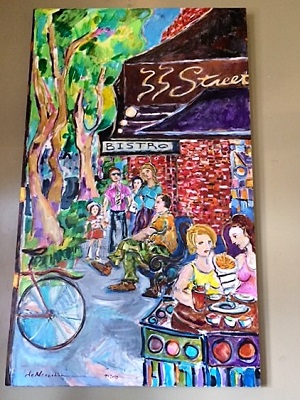 Description and review of lunch at the 33rd Street Bistro – located at 33rd Street and Folsom Blvd. in East Sacramento.

I recently met a friend at the 33rd Street Bistro for a midweek lunch.  It had been a while since we had gotten together so I was looking forward to “catching up”.

The 33rd Street Bistro has been a fixture in East Sacramento since 1995.  It had been, and I assume it still is, a popular breakfast and brunch spot.  I have to start going out for breakfast and/or brunch more often.

The parking at 33rd Street Bistro can be a challenge.  There is a very small parking lot in back of the building, and if that is full then street parking is the only other option unless you walk or bike.  I did not even check out the parking lot, but parked in the first nearby on-street parking spot I saw. My friend, however, did score a spot in the 33rd Street Bistro lot.

I arrived first, and my friend arrived shortly afterwards.  I had been greeted upon entering and was immediately seated at a table for two by the front window.  The restaurant, a casual dining spot, is both warm and inviting.

It was a sunny – but chilly day.  Despite the chill I noticed that several tables on the outside patio were occupied.

My friend enjoyed The Rainier, and said afterwards that she would order it again.  I also enjoyed my Buttermilk Fried Chicken Sandwich – it was crispy on the outside and tender and juicy on the inside.  I had been concerned about the “heat” of the sriracha ranch slaw but the dressing had more of a “tang” than heat and that worked for me.

I plan to check out the 33rd Street Bistro for breakfast/brunch next – as it has been some time since I last did so.

(4/16/2022)  The 33rd Street Bistro will soon be serving some of its patrons’ favorite dishes via a food truck!  Announcements as to where and when said food truck will be located at any given time will be announced via its Instagram bistro33onthego page.

(3/6/2020)  The 33rd Street Bistro will be closing its doors on March 8, 2020, according to the Sacramento Bee.  It was reported that the new owner of the building has declined to renew the restaurant lease.

This is a bitter blow to the Haines Brothers who have been planning a 25th Anniversary party for the restaurant later this year on November 14.

The good news, per the Sacramento Bee, is that the Haines Brothers would like to open another 33rd Street Bistro in East Sacramento in time for said anniversary!  Stay tuned.

(1/28/2018)  My friend Pam, who blogs about dining options for vegans in the Sacramento region at Sacramento Vegan says that their Impossible Burger (100% plant based burger, sharp cheddar cheese burger spread, pickled onions, tomato, lettuce, artisan bun) ($16) is the best vegan burger she has ever had!

What has been your experience at 33rd Street Bistro?  Do you have a favorite dish?