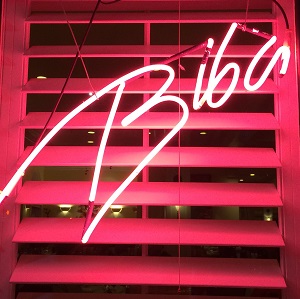 Description and review of dinner at Biba Ristorante Italiano, a fine-dining establishment located in Midtown Sacramento.

Biba Caggiano was born and raised in Bologna, Italy.   After moving to Sacramento with her husband, Biba opened Biba Ristorante Italiano in 1986.  The restaurant is housed in the historic Old Tavern (aka the Sacramento Brewery) building.  Biba has been serving authentic Italian food to grateful Sacramentans ever since.

Three friends and I took advantage of Sacramento Dine Downtown Week to enjoy dinner at Biba.  We had reservations for 6:15 p.m., and I had arrived a few minutes early.  I was greeted immediately upon entering and offered the choice of being seated at our table or taking a seat at the bar.  I chose to sit at the bar, and took the opportunity to enjoy a glass of Happy Hour cabernet ($7.50).  Happy Hour at Biba is Monday through Friday from 5:00 p.m. to 7:00 p.m.

When my friends arrived we were shown to our table.  Biba is known for friendly, attentive service – and our server Jorge was no exception.  He was outstanding and took very good care of us the entire evening.

It was mid-week, and the good-sized restaurant was virtually full.  My guess is that a number of other diners were also taking advantage of the Sacramento Dine Downtown Week pricing.

My friends ordered the drink of their choice while I continued to sip my wine.  We also ordered a basket of bread ($1.50) to munch on while we looked over the Sacramento Dine Downtown Week menu ($35 for 3-course Pre-Fix Dinner).  I highly recommend Biba’s house-made bread sticks

I had been really torn between the soup and salad, but I opted for the green salad,  The green salad was lightly dressed with a tasty vinaigrette dressing.  The celery root soup was also a big hit and every bite relished.  Neither of my friends licked their bowls, although they threatened to do so.

The 2nd course pasta dish was likewise greatly enjoyed by all.  As one would expect, the pasta is house-made.  One friend made a point of eating her pasta one penne at a time in order to prolong the enjoyment.  I decided to follow her example – that is how good it was.

Both main course dishes were likewise delicious.  The salmon was most flavorful and I enjoyed every bite.  The chicken received rave reviews.  The portion was generous, and my two friends were very happy to have leftovers to take home and enjoy the next day.

Coffee and dessert finished what was a most memorable evening.  Three of us ordered coffee ($3), and one a double expresso ($5).  We decided to share two desserts:

I enjoyed several bites of each.

To sum up, the four of us were in full agreement that our meal had been exceptional.  One friend declared that is was one of the five best meals she had eaten in her life!

What are your favorite memories?

(7/22/2022) What closed restaurant (2020 to present) do you miss the most? was the question the Sacramento Bee asked in a recent survey.  Five restaurants made the list of the most missed restaurants:

The only restaurant on the list I had not patronized prior to its closure was Roxy Restaurant & Bar, and I have blogged about three of the five.  I regret not blogging about Harry’s – it was a low-key hangout for legislators, legislative staff and lobbyists, among others.

(2/26/2021)  June Chang, a former employee of Biba Ristorante Italiano, is venturing into restaurant ownership.  He has assembled a variety of fellow former Biba employees, including the executive chef and pasta chef, and will be opening Mattone Ristorante in April, 2021.  The new restaurant will be located in the building previously occupied by Espanol Italian Restaurant in East Sacramento.  The restaurant will feature both new and old Italian cuisines.

(5/7/20) Biba Ristorante Italiano announced its closure effective May 9, 2020.  Limited during the pandemic lock-down to “take-out”, the hugely popular fine-dining restaurant was unable to make ends meet.  Biba’s will be sorely missed by Sacramentans!

(9/30/19)  The Sacramento Bee reported yesterday that Biba Caggiano died on Thursday morning, September 29, at the age of 82.  She leaves behind her husband of 59 years, two daughters and their families, as well as extended family in her native Bologna, Italy.

Biba was an institution in Sacramento, and she will be sorely missed by many.  She was not only a chef and restaurant owner, but also the author of eight cookbooks.  I recall watching her in years past on local TV as she demonstrated how various Italian dishes are made.

Biba was known for both her Italian cuisine and her hospitality.  I have always enjoyed dining at Biba where fine dining, a welcoming atmosphere and outstanding service combine to make every meal there special.

I read with great interest comments made by fellow restaurateurs including Randy Paragary (Paragary Restaurant Group) about Biba.  He reminisced that he and Rick Mahan (The Water Boy Restaurant and One Speed Pizza) took pasta making classes at Biba’s house in the 1980’s!

Something I was not aware of – In 2014, Biba was awarded the Giovanni Nuvoletti prize for preserving and protecting the authenticity of Italian gastronomy.  The award was from the Academy of Italian Cuisine – a group that apparently takes Italian cuisine very seriously.

As I read the newspaper articles about Biba I could not help but wonder what her death meant for Biba the restaurant.  It was with some relief that I read the family wants to keep the restaurant open – for as long as Biba customers keep returning.

It appears that long-time managers and staff plan to continue the Biba legacy of excellence – for which I am glad.