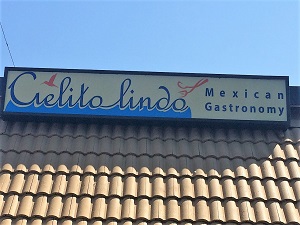 (UPDATED 5/22/2020)  Cielito Lindo Mexican Gastronomy closed its doors in late April 2020.  The closure announcement was made prior to the statewide COVID-19 pandemic stay-at-home order – so it was not a COVID-19 casualty unlike some other restaurant closures.

Cielito Lindo Mexican Gastronomy is located on J Street in East Sacramento.  The restaurant was closed as a result of a fire in 2014 soon after it first opened, but happily for Sacramento owner-chef Ramiro Alarcon reopened Cielito Lindo in 2015.

The restaurant features both classic and contemporary dishes from multiple Mexican regions – and it is well worth a visit. Cielito Lindo is not your typical Mexican restaurant.

A friend and I dropped by Cielito Lindo on a recent Saturday for lunch. We had spent the morning touring the six gardens featured on the 2017 East Sacramento Edible Gardens Tour, and we were both hungry and thirsty.

The air-conditioned interior of the restaurant was welcome after hiking for several hours around East Sacramento.  The restaurant was not crowded when we arrived around 1:00 p.m.  We were greeted and seated immediately.  The wait staff was both friendly and attentive. After overhearing the table behind us placing their order, I think it is fair to also add “accommodating” to my description of the staff.

Soon after being seated we were served warm tortilla chips and a red salsa.  The chips were warm and the salsa tasty.  I happen to prefer thin tortilla chips – and these were thick – but obviously homemade and good so no complaints. The salsa was just right.  A bit of a kick – but not too spicy (I am a wimp when it comes to spicy).

While neither of us was starving – we decided against ordering appetizers.  My friend had her heart set on trying a dish with mole – and none of the appetizers on the menu met this requirement.  We decided to each order an entrée – reasoning that we could take home the leftovers to enjoy for dinner – which we did.

My friend ordered the Enmoladas de Pollo (three corn tortillas filled with shredded chicken breast and covered with mole Poblano and a dash of sesame seeds, served with Spanish rice) ($14).  I decided on the Tacos de Cochinita Pibil (three corn tortillas stuffed with slow-cooked pork and refried black beans, topped with ixiote (pepper paste) marinate and citrus salsa, served with slices of pickled red onion, carrots and oregano) ($14).  Both of our dishes were designated as “authentic traditional” dishes.

Cielito Lindo also has several dishes identified as vegetarian on the menu.

Both of our dishes were tasty – and the presentation was very appealing.  I am no mole expert – but I did sample the Enmoladas de Pollo and I liked it.  I especially enjoyed my Tacos de Cochinita Pibil – the sauce in which the pork had been simmered made the dish special.

As we were enjoying our meal I noticed several patrons at a nearby table being served a bright green beverage, so when our waitress next stopped by I made an inquiry.  Next time I am there I intend to try the Agua del Campo, which is made with celery, parsley and pineapple.  It sounds very refreshing.

As we left Cielito Lindo after lunch to walk home I took note of the parking lot for future reference.  The parking lot is very small, and room to maneuver appears extremely tight.  Given my acknowledged difficulty in navigating tight spaces, if I drive to Cielito Lindo I intend to skip the parking lot and find street parking instead.  Better yet – I should just plan to walk and be glad that I can!

What is your favorite dish(es) at Cielito Lindo?  Any other comments you would add?