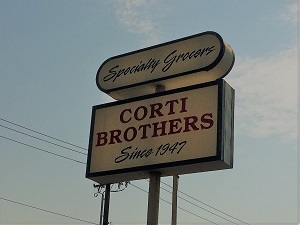 (Last UPDATED 11/24/2020) Description and review of Corti Brothers, a long-time Sacramento institution known for its gourmet, unique and high-quality imported foods, as well as quality meats and cheeses.

Corti Brothers has served the Sacramento area since 1947.  The store is a bit old-fashioned – and customers like it that way.  The store reminds one of an era gone by.  I have always found the staff to be friendly and helpful.

Darrell Corti is a well-known wine expert, and Corti Brothers boasts an extensive selection of wine.  Have a question as to what wine to serve at a special dinner?  I have had friends explain to the wine steward (in the long blue coat) their planned menu and budget and in turn receive one or more recommendations for their consideration.

After running a series of errands one day recently, I decided to treat myself and stop at the Corti Brothers deli counter for a sandwich on my way home.  Corti Brothers has a great deli – the sandwiches are exceptional.  I decided to order The Tuscany (Italian style fennel salame, sun-dried tomato-garlic pesto, Gruyère, fresh spinach leaves and red onion) on a poppy-seed roll. ($7.59)

I knew that a Corti Brothers sandwich would easily make two meals – and that The Tuscany would taste as good on the second day as the first.

One of the most popular sandwiches at the Deli is the Corti Special – you choose the bread (white, whole wheat, sourdough, light or dark rye, multigrain), garnishes (lettuce, tomato, onion, pepperoncini, pickles, mayo, mustard), and cheese (Swiss, Jack, Cheddar, American or Provolone) – and Corti chooses the meat – for only $5.99!  Given the quality of all their meats you can’t really go wrong.

You can order your sandwich on-line in advance – which is a really good idea and recommended if you are there to pick up lunch during prime time and have a specific time window.  The line can get quite long.

I was there a bit before the lunch rush – so I did not have a long wait.  As I was standing there waiting for my sandwich I started thinking about dinner.

(11/24/2020) Corti Brothers was named the Best Gourmet Grocery Store in the Sacramento Magazine Best of Sac 2020 competition.  Winners were chosen by the public via online voting.

(8/2/19)  Darrell Corti, renowned food and wine expert, will be honored late this month with a Sacramento Walk of Stars “star”.  One of four honorees, the unveiling of the stars will be held on August 28 at 9:00 a.m.   The four stars will be located on 18th Street between Capitol Avenue and L Street.

(9/11/2017)  Fun Fact:  Corti Brothers made Food & Wine magazine’s list of America’s Best Delis in May 2014.  The magazine stated, “The meat department stocks nearly everything, including kangaroo or antelope meat, and their sandwiches are legendary for a reason.”