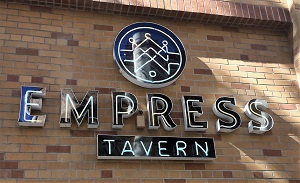 A friend and I recently met for lunch at Empress Tavern located in Downtown Sacramento.  Empress Tavern is located underground below the Crest Theater on K Street.

It was mid-week and we did not have a reservation, nor did we need one.  Just one of the many advantages of having the Legislature out-of-town (i.e. not in session).

The design of the interior of the Empress Tavern is striking.  As you walk downstairs (there is also an elevator) the beautiful brick ceiling with multiple arches immediately catches your eye.  The bar is located at the center of the room, and there is both booth and table seating.  You will also likely notice that the lighting is on the dim side.

We were shown to one of the booths lining the wall – which I much prefer.  On previous occasions while dining there I have been seated at the tables in the middle of the room.

This was the first time that I was at the Empress Tavern when the restaurant was not packed (and very loud).  Those beautiful brick ceiling archways do not help when it comes to acoustics.  It was great to be able to catch up on things with my friend without having to raise my voice to be heard.

As always, the service was pleasant and attentive.  As we had indicated that we were planning to share the two dishes our waiter brought us each a small plate along with a sharp knife to cut the sandwich in two and a spoon for the dressing.

First of all, the Buttermilk Fried Chicken Sandwich was not as described.  We cut the sandwich in two and as we started to eat we both agreed that it was not as we expected.

The fried chicken was very tasty, but it was covered with a sweet sticky sauce.   We were  glad that we were sharing the sandwich as half a sandwich was plenty as it was so sweet.

I checked online afterwards, and there was no sandwich as described on the lunch menu.  As the dinner menu offers honey hot fried chicken,  I can only conclude that the Honey Hot Fried Chicken was substituted for the Buttermilk Fried Chicken in our sandwich.

Did we say anything to our waiter? No.  We were hungry and it was not that big of a deal.

Secondly, the Queens Rotisserie Chicken Salad was also not as expected.  The salad was a deconstructed chicken salad with slices of tender chicken, butter lettuce, baby potatoes, baby carrots, and other assorted veggies.  We both enjoyed the salad – but the lunch menu had not indicated that the salad was “deconstructed”.

To sum up, despite the “unexpected” nature of our lunch we both enjoyed a glass of wine and our meal – and catching up on the latest news.

(1/23/2023)  A reinvented Empress Tavern recently reopened under new ownership.  The new owners are Robert Alvis and Elliot Prestwich of GD Theaters.  The partners bought the Crest Theatre in 2019, then the Empress Tavern after it closed.

A key consideration in the purchase was the fact that the Empress Tavern controls the Crest liquor license.  It’s license could not be renewed if the restaurant remained  closed.

For right now the menu is limited: five small plates and five entrees.  Reservations are not taken, and patrons place their order at the bar.

(8/17/2020)  Empress Tavern has indefinitely closed due to the lack of business in Downtown Sacramento as a result of the COVID-19 pandemic.  The Sacramento Bee reports that the popular restaurant plans to re-open at some point in the future when it once again becomes viable to do so.

(1/9/2020)  Effective January 8 the Empress Tavern is now serving lunch Monday thru Friday.  Lunch service at Empress Tavern has been an on-and-off since its opening. Starting lunch service again was prompted by the closure of its sister restaurant, Mother.  Mother, a popular vegetarian restaurant, was named to the 2019 Michelin Bib Gourmand list.

According to a Mother “Dear Sacramento” letter posted on its website, the Empress Tavern will add some of the Mother favorites to its menu.  Mushroom po boy or farro salad anyone?

The winning Empress Tavern burger includes two three-ounce patties, a slice of sharp American cheese, onion relish, iceberg lettuce and mortadella that has been crisped up like fried baloney.  The burger is then topped with a remoulade sauce.  Sounds yummy!

What is your favorite dish at Empress Tavern?