You are here: Home / Food & Drink / Estelle’s Bakery and Patisserie

(Last UPDATED 1/31/19) Description and review of Estelle’s Bakery and Patisserie located on Arden Way near Fulton Avenue in Sacramento.

A friend and I met for lunch at Estelle’s Bakery and Patisserie, a French bakery located on Arden Way near Fulton Avenue in Sacramento.  My friend had suggested Estelle’s, which opened at the Arden Way location not that long ago (January 26 to be exact), as she had been impressed during her first visit. 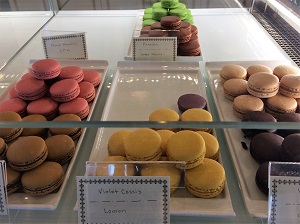 This was my first visit to this location, but I well remember Estelle’s Patisserie when it was located at 9th and K Streets in Downtown Sacramento.  It had been at the K Street location for approximately five years before it closed – something about a dispute with the building owner.

The force behind the business is Esther Son, a Sacramento resident for over 15 years.  “Estelle” is the French equivalent of “Esther” – hence the name of the business.

We had planned to meet at 11:30 a.m., so I arrived shortly beforehand.  The parking lots in front of and along the side of the building were full, so I parked a short distance away down a side street.

As I walked to the restaurant I noted that several spots had opened up in the parking lots.  When I walked in I expected Estelle’s to be packed – but it was not.  Apparently it does a good pick up and go business.

Additionally, the venue is quite large.  My friend, who is familiar with the area, told me that the newly renovated building had previously housed a business that sold pianos.  The building had apparently sat vacant for an extended period of time.

I seated myself at one of the tables and took a look around while waiting for my friend to arrive. As it turns out, her car was being serviced across the street so she just walked over.  The bakery and restaurant is brightly lit and the walls, ceiling, tables, chairs, etc. are all white.  Flowers on the tables, the pastries in the display cases, and other touches add splashes of color.

When my friend arrived we made our way to the counter and joined the short line while we decided what to order.  The half-sandwich and either soup or salad for $8.95 appealed to both of us.  I ordered the Tomato Bisque Soup and the Roast Beef Sandwich on a baguette (roast beef, cheese, greens, onion marmalade).  My friend ordered the Farmstead Salad (mixed greens, beets, goat cheese, pecans, balsamic dressing) and the Roast Beef Sandwich on a croissant.

We paid and received a number to place on our table.  It was not long before a server delivered our orders.

I enjoyed my soup – and my friend her salad.  I have to say that the onion marmalade really made the Roast Beef Sandwich something special.

After we finished my friend asked if I wanted to share a dessert – but I had to pass even though I was tempted.

The good news that that Estelle’s Bakery and Patisserie will soon be opening another shop in the Downtown Commons (DOCO) near the Golden 1 Center!  Something  to look forward to.

(1/31/2019)  Both the Arden and Downtown locations of Estelle’s are now serving beer and wine – so you can enjoy a glass of wine with your Croque Monsieur!

(4/26/2018)  Estelle’s is now open at the DOCO location – steps away from the Sawyer Hotel and across the common area from the Golden 1 Center.   The new outpost opened on March 29.  I stopped by the DOCO location recently to check it out when I was shopping downtown.  The downtown location is a fraction of the size of the Arden Way location – but my guess is it will be a popular spot to stop and grab coffee and a pastry or lunch.

The breads and pastries for the DOCO Estelle’s are produced at the Arden location – where everything is baked fresh daily.

Comments on Estelle’s Bakery and Patisserie?

Do you have a favorite menu item?  A favorite dessert?