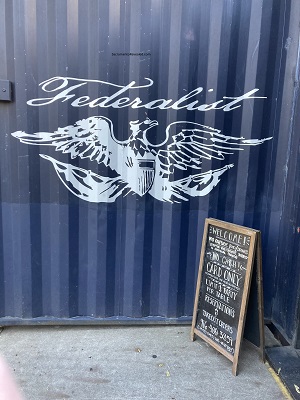 Federalist Public House & Beer Garden opened in 2014 in what had been the back yard of the Maldonado family home.   The open-air restaurant is housed in several large navy-blue shipping containers.

On the menu of the restaurant/bar is pizza cooked in an almond wood-fired brick oven and a variety of California craft beers.  The menu also includes a limited selection of “small bites” and several seasonal salads.  In addition to beer, beverage offerings include cider, wine and sangria.  Beverages are served in varied sizes of canning jars – a rustic touch.

You will find approximately a dozen craft beers on tap on any given day.  All beers served are from California, many of which are beers produced in Northern California.  You can check out what is on tap that day on their website.

Six of us met shortly after 5:00 p.m. to enjoy a beverage and a bite to eat on a recent Friday.  One friend and I arrived right around the same time and joined the short line at the counter to order and pay for our meal.

While it had been raining the day before, the sky was clear and the weather mild, so we chose an outside picnic table that would accommodate our group.  It did not take long before all six of us were seated.

The employees at the Federalist Public House & Beer Garden were both friendly and helpful.  For example, a passing employee stopped by to advise us to place all of our order numbers together at the end of the table to facilitate service.

The other four members of the group had chosen to order pizza. There is a wide  variety of pizzas on the menu and each ordered a different one ($18 to $30).  My Pizzetta was the first item to be delivered to the table, and it was not long before each of us had been served our meal. 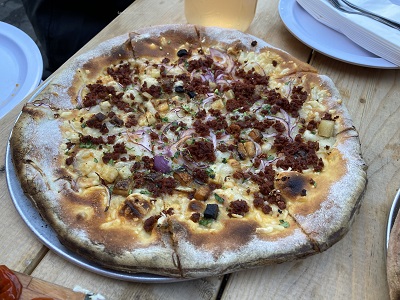 I am not sure exactly what I expected, but I was a bit surprised by my Pizzetta.  Served on a board were slices of a pizza (minus toppings), a handful of Greek olives, marinated artichoke hearts, slices of pickled red pepper and two containers containing fig jam and arugula pesto.  As it turns out, I enjoyed each element of the Pizzetta while visiting with my dining companions and sipping my sangria. 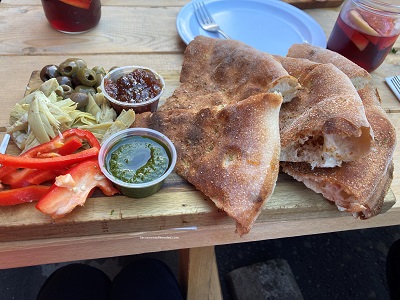 The Polenta and each of the pizzas were also said to be very good.  It was a very enjoyable way to spend an early evening enjoying the weather before the expected (and welcomed) heavy rain storm arrives in the next few days.

To sum up, Federalist Public House & Beer Garden is a great place to meet up with friends to enjoy a casual lunch or dinner in a friendly atmosphere.

What has been your experience there?  Do you have a favorite pizza?

Subscribe to SacramentoiRevealed.com to receive the weekly (with an occasional hiatus) newsletter direct to your inbox!  Comments are welcome.