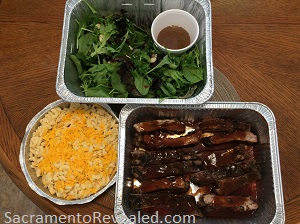 Eighteen members of the now disbanded Sacramento Women’s Action Network (SWAN) recently participated in a “happy hour” meetup via Zoom.  It was really great to “see” and catch up with everyone.

As we chatted, one of the former SWAN members mentioned the Gold Rush Grille and that she had recently enjoyed their ribs.  The Gold Rush Grille/Crisp Catering, a small family business, is offering a meal for four people for $25 complete (including delivery).

Later that week I checked out their menu.  Each day (Monday through Friday) the entrée offered changes.  Note: Each entrée includes a green salad.

The St. Louis Pork Ribs and Mac & Cheese sounded good to me so I put in my order via the website for that upcoming Wednesday.  One must put in their order, at a minimum, the day prior to and before 3:00 p.m.

An hour or so later I received a call to confirm my order and so I could provide my billing information.  I was told that they would call the day of the delivery to confirm that I would be home during the delivery window (prior to 3:00 p.m.)

When Wednesday rolled around I received the promised call and confirmed that I would be at home for the next hour.  Within that time-frame a nice young man arrived with my order.

The portions provided were as stated – a meal for four persons.  The good sized mixed green salad included slivered almonds and dried cranberries and came with a tasty salad dressing.  The dozen (12) ribs, drizzled with BBQ sauce, were both meaty and tasty.  I was somewhat disappointed with the mac & cheese – but that was only because I happen to like mine a bit more creamy and cheesy.

Gold Rush Grille/Crisp Catering is offering an opportunity for Sacramentans to partner with them to provide meals for first responders and front-line workers during this extraordinary and difficult time.  Check out the details here.

Are you familiar with Gold Rush Grille/Crisp Catering?  Have you taken advantage of one of their meal deals?

Subscribe to SacramentoRevealed.com to receive the weekly (with an occasional hiatus) direct to your inbox!  Comments are welcome.