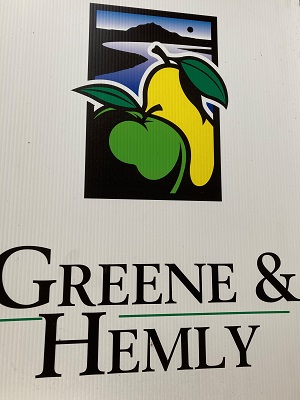 Description of SacTown Bites tour of Greene and Hemly, a Sacramento River Delta grower, packer and shipper of pears and apples.

Our first stop during the SacTown Bites Taste of the Delta Tour was the Greene and Hemly packing shed in Courtland.  Giving the specially arranged tour that day was Doug Hemly.  He and his wife Cathy are the fifth generation of the family to run the business.

Doug was a most engaging tour guide.  He shared the family’s history dating back to the Gold Rush era when Josiah Greene purchased the land and started farming.

The Sacramento River Delta region is known for its pear production.  The combination of soil and weather provides the ideal conditions to grow pears. Note: See “Courtland Pear Fair” below.

Doug shared with us that he had recently “resigned”, stressing that he was not “retired”.  Taking over are Doug and Cathy’s daughter Virginia and son Matt, the sixth generation.  Virginia manages the packing facilities and Matt manages the orchard operations.

When he was cleaning out his office so that Virginia could move in, Doug shared that he had come across a number of itineraries for trips planned but never taken.  He is hoping that now that he has “resigned”, he and Cathy can start traveling. 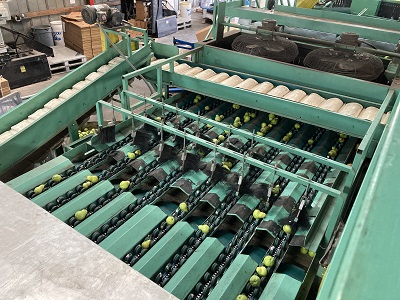 Our small group then proceeded to tour the packing shed followed by a brief look at the “cooler” where the boxed produce is stored at 30 degrees.

When we approached the packing shed its employees were on their lunch break. Picnic tables were set up outside in the dense shade of several trees nearby.  The picnic tables had an ingenious setup utilizing heavy clear plastic to separate the diners, while still allowing them to see each other and converse while they were eating and unmasked.

While we would have liked to have seen the packing operation in action, the timing allowed Doug to explain about the functions of the machinery we were viewing.  Otherwise, it would have been too loud for him to do so.  Being processed that day were both pears and Granny Smith apples.

Afterwards, Doug pointed to the adjacent levy and shared an amusing story.  A federal government employee, while out inspecting the levy, commented disapproving to Doug about the proximity of the parking shed to the levy.  Doug, in turn, explained that the packing shed had been in place long before the levy was built!

Multiple topics were covered that day, including water and international trade. At the end of the tour, we all agreed that it had been a most informative and interesting tour.   After thanking Doug for so generously sharing his time, we headed off to our second stop on the Taste of the Delta tour – Hemly Cider.

The annual Courtland Pear Fair, held on the last Sunday in July, is a celebration of the pear.  A fun run and pancake breakfast kick off the event.  In the afternoon there are musical performances, a parade and other activities (i.e., pear pie eating contest, etc.). Check out the event website for up-to-date information.

Comments on Greene & Hemly or the Courtland Pear Fair?

Have you previously attended the Courtland Pear Fair?