A friend and I recently enjoyed dinner at La Trattoria Bohemia prior to a performance of An American in Paris at the Sacramento Community Center Theatre (now renamed the SAFE Credit Union Performing Arts Center).

Parking can be an issue in the immediate area, but we found a spot on 36th Street right around the corner from the restaurant.

I did not expect La Trattoria Bohemia to be busy at 6:00 p.m. on a Tuesday, but I made a reservation anyway – just in case as we were going to the theatre.  Although there were only a few people seated inside when we entered I observed that the restaurant was set up to serve two larger parties – so I was glad I did.  La Trattoria Bohemia also has a small outside patio so that is always an option.

Our table was waiting and we were greeted and seated immediately.

Chef Mark Lastuvka opened La Trattoria Bohemia in 2000.  The restaurant is an intimate and casual neighborhood restaurant that is both inviting and comfortable.  Then there is the food! Chef Lastuvka makes all the pasta and bread from scratch.

SacramentoRevealed.com – All Things Sacramento (from a  personal perspective)

To start, we each ordered a glass of the House Red Wine – Blaufrankisch, Frankovka, Czech Republic ($5). It had a very unusual taste and aftertaste so later in the meal we switched to a glass of Monte Antico Rosso Sangiovese ($7.50), an Italian wine, which was more to our liking.  I guess it all comes down to what your taste buds are used to.

The La Trattoria Bohemia menu offers  both Czech and Italian dishes, but we decided to stick with the Czech theme.

Note:  Both the salad and the chicken paprikash were subject to a $2 split order charge.

The Bohemian Potato Pancakes were very tasty.  They were much more substantial than the thin and crispy Polish potato pancakes I am accustomed to.  We both also liked the addition of the smoked salmon, capers, and scallions.

I enjoyed the salad, containing as it did many of my favorite salad ingredients, and the chicken paprikash was a real taste treat.

To sum up, we were both happy that we had shared the three dishes as we were comfortably full – unfortunately no room for dessert.  My friend hit the nail on the head when she afterwards described our meal as “Czech comfort food”.

(7/27/2022)  A friend and I recently decided to catch up over a take-out pizza.  I suggested that we try the Italian side of the nearby La Trattoria Bohemia menu.  It seemed the perfect opportunity to try their pizza as we planned to dine in my back yard. 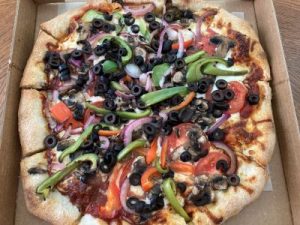 The pizza smelled great, and the toppings were piled high.  Can their be too many toppings on a pizza?  In this particular case the answer is yes.  The very middle of the pizza was a bit soggy from the veggies.  This may well not be an issue with another type of pizza.

Both of us enjoyed the La Trattoria Bohemia pizza.  A small pizza would have been perfect, but neither of us minded having a few slices leftover for another meal.  Pizza crust is the most important part of a pizza to me, and while the crust was good, it was not as chewy as I like.  My friend, however, found it to be just right.

(3/5/2022)  Two friends and I recently enjoyed a late lunch at La Trattoria Bohemia.  I was pleased to introduce them for the first time to this great Czech and Italian restaurant.

As it turns out, all three of us ordered one of the menu items listed as “Czech Specialties”.  I had enjoyed the Chicken Paprikash (slowly cooked chicken thighs in cream sauce with onions and sweet Hungarian paprika, served over homemade spätzle) ($22.75)  on a prior visit – so I ordered it again.  One friend ordered the Chicken Picate and the other the Pork Picate (Sauteed chicken breast or pork filets in white wine sauce with capers, served with roasted rosemary potatoes and green cabbage ($23.75).

The Smoked Salmon was enjoyed by all.  The attractive and tasty dish was a great way to start the meal.  The Chicken Paprikash was as good as I remembered, and both the Chicken and Pork Picate received glowing reviews, as did the accompanying rosemary potatoes and cabbage.  Needless to say, the cabbage was not your ordinary everyday bland cooked cabbage.  The dish had been lightly dressed and expertly seasoned thus making it praiseworthy.

The portions were substantial, and all three of us were happy to take home leftovers to enjoy the next day.

To sum up, my friends loved their first experience at La Trattoria Bohemia and they are looking forward to dining there again soon.  I just hope that they invite me to join them!

What has been your experience at La Trattoria Bohemia?  Do you have a favorite Czech dish?  A favorite Italian dish?