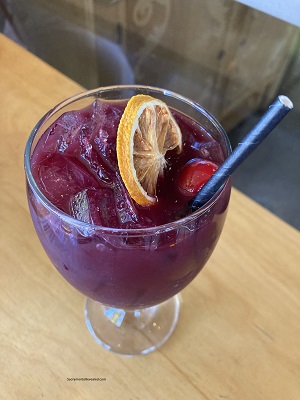 (Updated 2/4/2022) Description and review of Mesa Mercado, an upscale Mexican restaurant located in the Milagro Centre in Carmichael, CA.

A friend and I recently enjoyed weekday lunch at Mesa Mercado.  The restaurant is owned by Ernesto Delgado, who also owns two popular restaurants in Downtown Sacramento – Mayahuel and La Cosecha.

A Bit About Mesa Mercado

The restaurant is situated adjacent to the large outdoor food court/common dining area for which Milagro Centre is known. 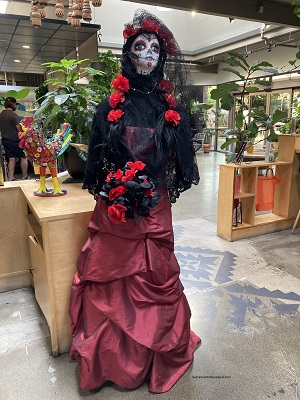 Mesa Mercado has a very open feel, in part because the interior does not have walls enclosing each of restaurants.  For example, one could enter GB Gelato from its door on the common area or just stroll over from inside Mesa Mercado.

In response to our request to sit outside, we were led to the patio in the front of the restaurant.   The (long) patio is good-sized, and has a long table with benches on one end that looked big enough to seat a party of 8-10.

Note:  Mesa Mercado adds a 3% Kitchen Appreciation fee to the bill that goes directly to the kitchen staff.

After seating us and providing us with menus, our waitress brought us both water and a small complimentary bowl of mangoes sprinkled with chili powder. 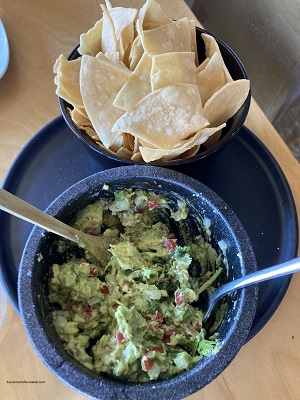 While we were looking over the menu, we munched on the My Guacamole and tortilla chips ($9.99).  The menu states that the My Guacamole is served “deconstructed” – but ours was not.  It did, however, contain whole sprigs of cilantro (stems and all) which I thought a bit strange. 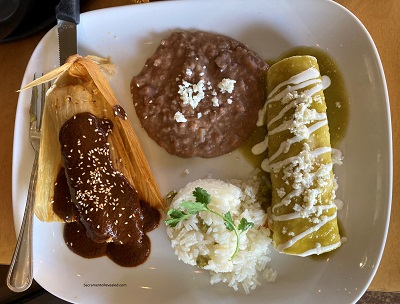 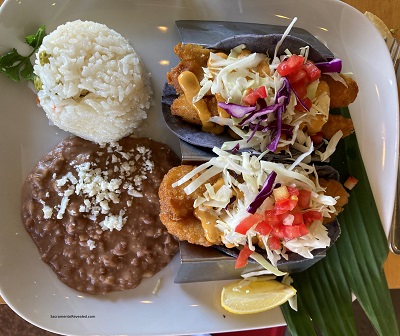 It was not long before our lunch was served.  The tamal and enchilada were said to be tasty, and my friend remarked that the meal would be both lunch and dinner for her as she finished her meal.

My two fish tacos were served on blue corn tortillas, and they were accompanied with both rice and beans which was unexpected.  There was more batter on the fish than I would have liked, but each taco had two good-sized portions of cod.  The blue corn tortillas were sturdy and held up nicely until the last bite.  I was happy to take my second taco home for dinner that evening.

Mesa Mercado’s menu offers something for everyone – meat eaters, vegetarians and vegans in an attractive setting.