You are here: Home / Food & Drink / One Speed – Sacramento Restaurants (part of an occasional series) 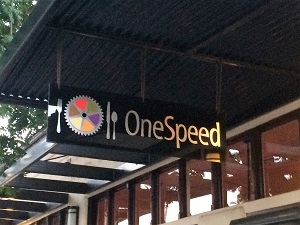 One Speed in East Sacramento has been one of my long-time favorite neighborhood restaurants.  The restaurant, which opened in 2009, is owned by Rick Mahan who also owns a popular upscale restaurant in Midtown – The Waterboy.

In my experience one can always be assured of a good meal utilizing high-quality ingredients and friendly service when dining at One Speed. My daughter and I were recently pondering where to go for dinner and both of us had One Speed on our list of top two choices.   Bingo!

When we arrived we decided to sit inside as opposed to outside as it was a bit on the cool side – fall in Sacramento is finally here.  Luckily we were able to be seated immediately.  We ordered a ¼ carafe of white wine and then turned to the menu.

My daughter was contemplating ordering one of her favorite dishes (Spaghetti Pomodoro), but after we both considered several different entrees we decided to order an antipasto and pizza to share.

As a general rule we would order one of One Speed’s salads – such as the Garden Salad with Blue Cheese and Walnuts – but we decided to mix it up for a change.

What is Fior di Latte?  Google tells me that it is mozzarella cheese made from fresh cow’s milk.

As much as I enjoy One Speed’s salads, I was glad we decided to try the crostini. It was very tasty and we savored it while waiting for our pizza and catching up on things.

One Speed’s pizza is excellent – thin crust and tasty toppings equal great pizza in my book.  The restaurant also does a great take-out business.  It is not unusual to see patrons picking up three, four or more pre-ordered pizza’s at a time.

To sum up, we were both fairly hungry, so we ate everything with the exception of two slices of pizza.  All in all a very nice evening – good food, good conversation, good company.

My daughter has been a really big help in setting up my blog – and I always check in with her when encountering technical issues that need to be resolved.  She shared with me that evening that she has to “chuckle” every time she reads one of my restaurant reviews with the “part of an occasional series” tagline.  I have since dropped that.

I guess it is true – my restaurant reviews are more than “occasional”. However, I do like to keep in touch with friends, former co-workers and colleagues – and I do have season theatre tickets to the Broadway Series, Music Circus and B Street Theatre.  So – lots of opportunities to sample Sacramento’s wealth of eateries.

One Speed is surrounded by other neighborhood businesses lining Folsom Boulevard so parking can sometimes be a bit of a challenge.   I find that going earlier as opposed to later in the evening generally works best, especially on the weekend.

(June 2021)  I was happy to find out that One Speed will remain open – for now.  Mahan has a lease for the building his restaurant occupies and plans to remain at that location until the end of the lease.  Hopefully, when the times comes he will move One Speed to another location in East Sacramento.

(3/14/2021)  Rick Mahan has announced that One Speed will close at the end of the year!  No, it is not because of COVID-19.  The building housing One Speed is owned by Sheree Johnston, the owner of the now closed adjacent business – East Sacramento Hardware.  Johnston, who recently retired, plans to demolish the buildings she owns on the block and construct in their place a new mixed-use building.

Mahan has said that he intends to try to find a new location for One Speed!  Stay tuned!

Comments on One Speed?

Do you have a favorite dish at One Speed?