Description and review of Rooster’s Breakfast & Mimosas, a casual breakfast/brunch restaurant in the River Park neighborhood of East Sacramento.

On a recent Sunday morning I met a friend at Rooster’s Breakfast & Mimosas for brunch.  My friend lives in River Park but had not yet been there.  The restaurant opened in June 2020 during the pandemic.  Not the best of timing, but business appeared to be booming.

I arrived first and put my name in for a table.  I was told it would be 40 minutes, and the waitress took my cell phone number so she could call when they were ready to seat us.  As it turns out, about 20 minutes later our table was ready.

The interior of Roosters is much larger that I had first thought, and there is also a good-sized patio area.  A band was set up on a portion of the outside patio providing musical entertainment for the diners.

Rooster’s menu is extensive.  Various Mexican breakfast plates are offered, as well as omelets, crepes, skillets, benedicts, create your own combo’s, sandwiches, burgers, salads, etc.   I would venture to say that the menu has something for everyone.

The beverage menu is likewise extensive.  It includes mimosas, sangrias, margaritas, beer, wine, etc.   A very popular beverage item, as we discovered after being seated, is a huge communal mimosa served with four straws.  I did not see the item on the menu, so I don’t know its cost.  I will say, however, that the idea of having to stand up to take a sip of a drink does not appeal to me.

To start out, I ordered the Mexican Pomegranate Mimosa (Pomegranate juice & champagne) ($6).  The mimosa was refreshing, but I thought small for $6.  I would rather have paid $8 for a decent sized drink.

Both of us ordered the Breakfast Enchiladas (two cheese enchiladas with choice of green or red sauce, two eggs any style, onions, cilantro, sour cream, side of black beans, cilantro lime rice) ($13).

When we were finally served, it was disappointing that the enchiladas were barely lukewarm.  The eggs, black beans and rice, however, were warm if not hot. 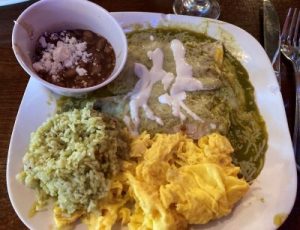 Roosters was hopping that late Sunday morning.  The staff we encountered were both cheerful and friendly.

As we waited to be served the noise level made it difficult to comfortably converse.  As my friend observed, the band really did not need to be amplified given its close proximity to the tables.

Further, it did not help that a table of six nearby had three of the huge mimosas on their table.  Let’s just say that they were having a really good time.

While it was a mixed crowd, many of the clientele appeared to be students from nearby Sac State.

To sum up, my friend indicated that she would not be patronizing Rooster’s again in the future.  She cited the combination of the just so-so meal and the noise level.  I, on the other hand, am willing to give it another chance – on a weekday.

Comments on Rooster’s Breakfast and Mimosas?

What has been your experience at Rooster’s?