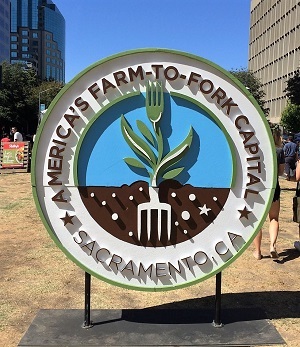 Description and review of the 2016 Sacramento Farm-to-Fork Festival, held annually in September.

This year the annual Sacramento Farm-To-Fork Festival (Festival) was SIX blocks long.  That is two blocks longer than 2015!

The Festival, which runs from 11:00 a.m. to 6:00 p.m., was held on Saturday, September 24th.  It was a beautiful day and I made my way to Capitol Mall, the Festival venue, early in the afternoon.

I parked in a nearby City parking garage – $5 all day on weekends.  Capitol Mall was only a short walk away.

The Festival is family and dog friendly, and I briefly considered taking my dog Mickey with me.  However, I decided to leave him home instead.  It was a good decision as I am quite sure that I would have had to carry him most of the time to ensure he was not in danger of getting stepped on or run over by a stroller.

Capitol Mall is a large avenue with a grass-filled median. I entered the blocked off area of Capitol Mall closest to the State Capitol Building where volunteers were valet parking bikes (free but donations gratefully accepted).

My plan of action was to stay to the right and make my way slowly towards the Tower Bridge, the location of the annual Farm-to Fork Dinner, before making my way back.

As I made my way down Capitol Mall in a leisurely manner I checked out the numerous vendors and joined the queue for a free sample occasionally.  After reaching the bandstand stage near the Tower Bridge, I made my way back to where I started on the opposite side of the street.

There is live music all day long at the Festival. This year the headliner band was the Wallflowers led by Jacob Dylan, Bob Dylan’s son.

Food and drink take center stage at the Festival. There are cooking demonstrations, a legion of food trucks and other food vendors, local produce and farm products, and the opportunity to partake of award-winning wines and a variety of craft beers, among other things.

Food trucks and food booths as well as wine and craft beer venues dotted the length of Capitol Mall.  While many vendors offer free samples, other vendors offer “taste samples” and price them accordingly.  $2 shrimp cocktail anyone?

When I saw the Bogle Winery pavilion I decided to purchase a glass of chardonnay ($5) to sip as I continued on my way. Bogle Vineyards and Winery is based in Clarksburg, a small farming community in the nearby Delta region.

There is also an opportunity to meet local farmers at the Festival.  Several small local farms whose business model is direct marketing had booths.  The farmers were available to explain what they grow and what you can expect if you subscribe to their service i.e. a weekly or bi-weekly box of produce and other farm products year-round.

I stopped several times at the cooking demonstration stages which were set up on the grassy median to watch the chefs as they demonstrated cooking techniques and whipped up recipes.  The chefs were live-filmed and their every move could be seen on the large screens set up in front of the stage.

One of the things the Festival does right is to provide shade structures which can be found throughout the venue.  Festival goers can sit in the shade when viewing the cooking demonstrations or listening to the various bands, for example.

While this past Saturday was the perfect temperature and there was a light breeze – I do recall that it was quite a bit warmer last year here in Sacramento – and that every bit of shade was welcome.

The Sacramento Bee reported the next day that the estimated attendance at the Farm-To-Fork Festival was between 60,000 and 65,000.  While that is a sizable crowd, I did not find it difficult to make my way through the venue – although there was at times a bit of a bottleneck in front of certain vendors.  The BBQ oysters, for example, appeared to be very popular.

To sum up, the Farm-To-Fork Festival is an enjoyable way to spend an afternoon and early evening.

Comments on the Sacramento Farm-to-Fork Festival?

Did you attend the Farm-To-Fork Festival?  What do you like best and/or least about this annual event?