(Last UPDATED 11/1/2021) Description and review of Seasons 52, a chain restaurant located at the entrance of Arden Fair Mall in Sacramento.  NEW: See “Seasons 52 Revisited” below!

Seasons 52 is part of a restaurant chain – but it is a cut above in both atmosphere and service.  The restaurant has a seasonal menu that focuses on dishes on the lighter side, calorie-wise.

We were a party of ten – out for dinner on a Saturday night prior to attending a play at B Street Theatre.

As to be expected, the parking lot at Arden Fair Mall was crowded.  Luckily, my companion and I found a parking spot in short order.  However, others in our party had a bit more difficulty.  It was a rainy night and the free valet parking was in high demand.

Seasons 52 was hopping.   We had reservations, being as we were a rather large party.  Our group was seated in one of the side rooms off of the main dining area.  That worked well as it was a bit quieter and thus easier to chat.

A large (pull down type) screen on one side of the room was showing a sporting event.  I looked around to see if anyone was watching the game – but if they were it was not obvious to me.  The flickering lights of the screen was a bit of a distraction, but not too bad where we were seated.  However, I felt sorry for the diners who were seated directly in front of the screen.

The restaurant is quite large, but I suspect it might be a good idea to make a dinner reservation in advance regardless of the day of week. The outdoor seating area looked like a great place to settle oneself when the weather is nice.  Seasons 52 also serves lunch.  Sunset at Seasons (aka Happy Hour) is from 4:00-6:30 at which time $5 small plates are available.

As we were on a time schedule I let our waitress know as soon as she came to take our drink order what time we had to leave.  This was the second time I have been to Seasons 52, and I have found their service from the moment you walk in the door to be friendly and attentive.

Seasons 52 has an extensive menu, and parts of the menu change weekly.  As we were seated at a long table I can only comment on several of the dishes served in my immediate vicinity.

As my companion and I were not particularly hungry we each ordered a small salad and two appetizers to share.  The Spinach and Caramelized Bosc Pear salad (340 calories) and Organic Field Greens salad (180 calories) started us off.  We both enjoyed the Shrimp Scampi Skillet (460 calories), but the Cheese Fondue (780 calories), served with assorted bread sticks, etc., left something to be desired.  It tasted like melted Gruyère and cheddar cheese.  The dish definitely needed something to amp up the taste – perhaps some garlic.  It is not something I would order again.

Two in our party in my near vicinity started out their meal with a cup of soup.  Each of them said that they enjoyed their respective choices – the Butternut Squash Soup (200 calories) and Porcini Mushroom Bisque soup (260 calories).

The Lump Crab Wedge Salad (320 calories), an entrée salad, had a great presentation and the crab was said to be tasty – but the salad was largely lettuce.  You may want to order additional dressing on the side if you order this dish.

The Lobster Pappardelle (760 calories) looked great and received high marks.  The portion appeared to me to be on the small side – but then that is how Seasons 52 keeps the calorie count on the low side.

To finish off the meal Seasons 52 offers an assortment of dessert shooters ranging from 220-370 calories ($3).  The waitress brings a platter of desserts in shot glasses to the table, describes each of them, and diners make their choice.  I did not indulge that evening, but I have previously.  Each dessert offers the diner several bites of rich and tasty goodness.

To sum up, despite the fact that we were a group of 10 our waitress managed to take our orders, serve our meals, check back with us to see what else might be needed, offer us dessert and juggle multiple checks/payments and still get us out the door on time!  That’s what I call great service.

Three of us stopped by Seasons 52 for a late lunch after seeing “Dune” in the nearby theater.  This was the first time any of us had been to the movies since to the beginning of the COVID-19 pandemic!  Not just any movie could tempt me to go to a movie theater at this point in time – but I made an exception for Dune.  Indeed, this is one movie that really needs to be seen on the big screen!

It was a beautiful day, and the three of us sat on the Seasons 52 outdoor patio to enjoy our lunch.  Two of us ordered a glass of wine.  We munched on the Shitake Mushroom Flatbread ($14.50/570 calories) while we looked over the menu.  It was both light and tasty – just enough to whet the appetite. 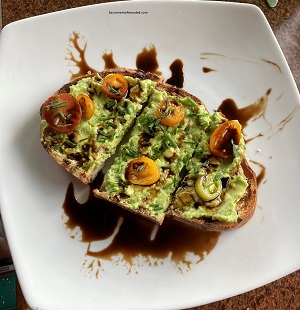 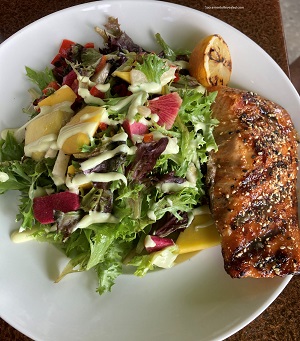 Another friend started with a cup of the Butternut Squash Soup ($7.00/230 calories).  The soup was as good as she remembered, having had it previously.  For her entrée she ordered the Sesame-Grilled Salmon Salad (organic greens, mango, jicama, lemongrass sauce, toasted sesame dressing) ($21.00/510 calories).  It was said to be delicious!

I also ordered an entrée salad – the Steak Salad (skirt-steak, baby spinach, romaine, sweet corn, wood-grilled red pepper, pumpkin seeds, Gorgonzola, cumin-lime vinaigrette ($20.00)/530 calories).  It was delicious and I enjoyed every bite.  I would very much like to get the Season 52 recipe for the cumin-lime vinaigrette. 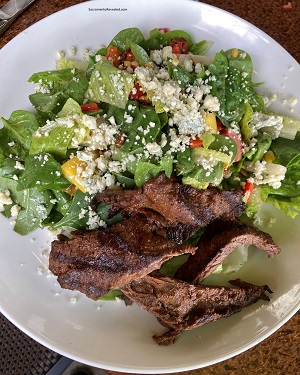 After finishing our meal, reasoning that our late lunch was also our dinner, we topped off the meal with dessert.  A few bites of a rich dessert goes a long way and left each of us more than satisfied.

A great movie and a yummy lunch – what more could anyone ask?

(11/17/2018)  Seasons 52 recently scored the number two spot on the Hoodline list of Sacramento’s Top 5 Spots to Score Seafood!  Hoodline crunched the numbers using Yelp data and their own “secret sauce” to compile the list.

Do you have a favorite dish or dishes at Seasons 52?  Any other observations?