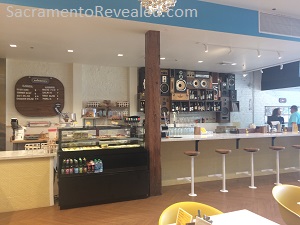 (Last UPDATED 12/27/2021) Description and review of Solomon’s Delicatessen, located on K Street between 7th and 8th Streets in Downtown Sacramento.

The opening of Solomon’s Delicatessen had been highly anticipated, with everyone in Sacramento in agreement on the need for a good Jewish deli.  The delicatessen, named in honor of Russ Solomon of Tower Records fame, opened on July 1.

The site of Solomon’s Delicatessen was at one time a Tower Records store.  The mural that Russ Solomon had commissioned over the entrance of his store has been beautifully restored.  The colorful mural sets the tone for the interior of the delicatessen with its bright colors and retro record store décor.

A friend and I stopped by Solomon’s Delicatessen on a weekday morning for breakfast.  Our plan was to check out a few of the new murals created during the Wide Open Walls 2019 Mural Festival afterwards.

There were only a few patrons in the delicatessen when we arrived.   While we dined several people came in and picked up orders to go. 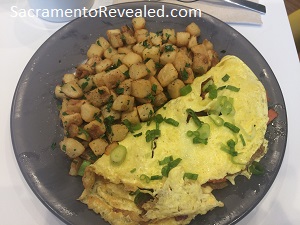 My friend ordered The Leo Omelet (house-made lox, eggs, and sautéed onion with Solomon’s potatoes) ($16) and I ordered the Traditional Potato Latkes (served with house-made applesauce and sour cream) ($12).

It did not take long before our meal was served.  The Leo Omelet did not impress consisting as it did of lots of onions combined with lox that tasted “off” to my friend. The accompanying potatoes were another letdown.  My friend speculated that the issue was perhaps the oil used to cook the potatoes. 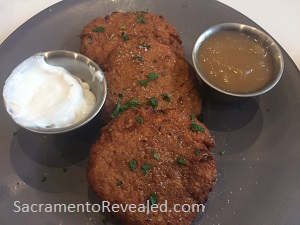 The potato latkes were not to my liking.  The inside of the latkes had no texture, and the few bites I took did not taste like either potato or onion.  I was, however, left with a very unpleasant aftertaste.  The house-made applesauce, on the other hand, was tasty.

I was so disappointed with the potato latkes that I approached the counter to inquire as to what ingredients had gone into the dish.  Of Polish descent on my father’s side, I am no stranger to potato latkes and these were unlike any I had eaten previously.

The chef to whom I spoke mentioned potato, onion, matzo meal and schmaltz (rendered chicken fat).  He also offered to substitute in their place the Farmer’s Cheese Blintzes (served with house-made seasonal compote and sour cream) ($16).  I gratefully accepted his offer as I did not plan to eat another bite of the latkes. 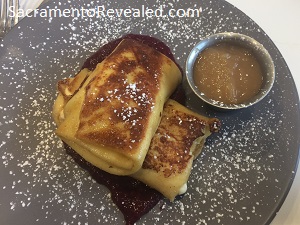 It was not long before the Farmer’s Cheese Blintzes were served.  I was disappointed once again.  The blintze pancake was done just right – but the cheese filling was another story.  I can only describe it as blah – a lot of blah.  The dish might have benefited from reducing the filling by half.  The accompanying fresh raspberry sauce was unappealing, filled as it was with seeds. After three bites I called it quits. 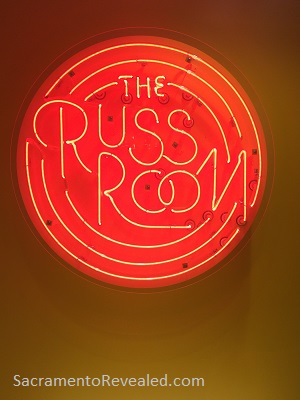 We finished our coffee and decided to explore the second floor of the deli before we left.  The upstairs “Russ Room” is a very nice space.  Walk up the stairs and at the top you will find Russ smiling at you on your right.  There is also a small elevator to the second floor. 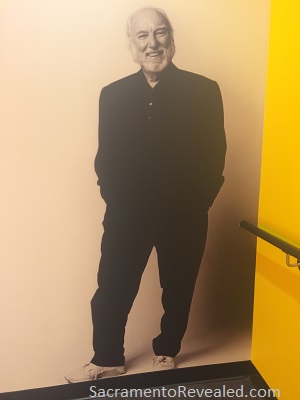 Also taking its cue from the mural on the exterior, the Russ Room is a riot of primary colors – very cheerful.  Take time while you are there to look at the pictures that line the walls – a real blast from the (musical) past.

To conclude, all I can say is that I so wanted to like Solomon’s Delicatessen. I had planned to take my daughter (a former Tower Record and Tower Books employee) there when she next visits but I have scratched that plan for now.

Will I give Solomon’s Delicatessen another try at some point?  Yes, but it is unlikely to be anytime soon.  I left (literally) with a bad taste in my mouth.

(1/3/2021)  Solomon’s Delicatessen has re-worked their menu, and reportedly hired a new chef.  That being the case, I plan to give the restaurant another try – and will add my new review to this blog post.  So – stay tuned.

What has been your experience at Solomon’s Delicatessen?