You are here: Home / Food & Drink / Taste of East Sacramento 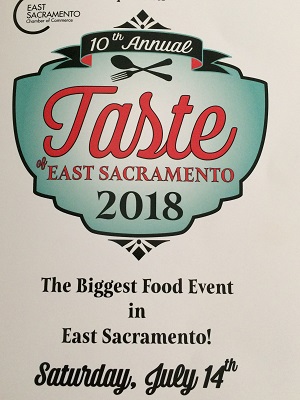 The East Sacramento Chamber of Commerce sponsored Taste of East Sacramento was held at the Annunciation Greek Orthodox Church complex on Saturday, July 14.  The venue is perfect for what has evolved into the biggest food event in East Sacramento over the past ten years.

The very first Taste of East Sacramento was held at the Shepherd Garden and Arts Center located in the panhandle of McKinley Park.  It featured 14 local restaurants, the only brewery in East Sacramento (how things have changed!) and nine wineries.  As the event grew it moved among venues in East Sacramento – but I tend to think that the Annunciation Greek Orthodox Church complex will become its permanent home – as is now the Greek Festival.

The program this year listed eighteen (18) local restaurants/food vendors and twenty-one (21) beverage vendors.  Note: While Compton’s Market and the Sacramento Natural Food Co-Op were listed under “Food” both served food and beverages.

While wineries were in the majority, several East Sacramento breweries (Porchlight, Sac Yard Community Tap House, Sac Town Union) more than held their own and appeared to be very popular with the crowd.  To round out the offerings, Chocolate Fish Coffee Roasters and Vibe Health Bar were there to quench the thirst of non-drinkers.

My friend and I arrived at the Taste of East Sacramento event at about 6:45 p.m. As we entered the foyer of the facility we handed over our tickets and received a wrist band.  From there we headed over to a nearby table to pick up an engraved wine glass and a small plate/tray with a built-in wine glass holder.  Also located in the foyer were a photo booth and several of the restaurant/food and beverage vendors.

We made our way around the tables showcasing varied “bites” and sampled whatever struck our fancy.  A special shout out goes to the 33rd Street Bistro, the Limelight, Evans, Celestines and Sellands.  Alas, I was unable to sample the wares of Kru or Canon.  When I stopped by the Kru and Canon tables about 7:15 p.m. the tables were bare and staff lingering in the vicinity informed that they had “run out”.  Yes, both are very popular restaurants, but I was very surprised that they had so miscalculated, especially given the event was scheduled to run for three hours (6:00 p.m. to 9:00 p.m.).

To sum up, everyone appeared to be having a great time that evening.  Attendees mingled as they made their way around the venue – chatting with friends, neighbors, and the local businesses whose participation makes the event possible.  As I left the event I made a pact with myself – the next time I attend Taste of East Sacramento I intend to arrive sooner than later!

(5/12/2022) The 12th Annual Taste of East Sacramento event seemed extra special this year.  While we are not out of the woods yet, as far as the COVID-19 pandemic goes, I did not want to pass up the chance of attending the April 30 event.  I am double boosted – and ready to finally get out and about more!

The event was well attended, and well organized as usual.   It is always fun to chat with other attendees and sample the various food and drink offerings.  There were also some very nice baskets, etc. donated for the silent auction.

A relative newcomer to the East Sacramento restaurant scene is Poppy by Mama Kim.  I have yet to visit Poppy – but it is definitely on my “must try” list!

To sum up, it was a very enjoyable evening and I am glad that I went.

Comments on the annual Taste of East Sacramento?

If you have attended one or more of these events – what has been your experience?  What would you add?