(Last UPDATED 5/30/2019)  Description of and background on Sacramento’s historic Memorial Auditorium, one of the City’s crown jewels.

Sacramento’s Memorial Auditorium is one of Sacramento’s crown jewels.  Listed on the National Register of Historic Places  (#78000743) the building recently underwent a tasteful renovation.  An open house was held for the public on Memorial Day, 2019.

Located at 16th and J Streets in Downtown Sacramento, Memorial Auditorium celebrated its 90th Anniversary this year! The occasion was celebrated in early March.  Events that day included a dessert reception, a retrospective of the building’s history utilizing historic photos and footage, and the showing of the Buster Keaton silent comedy classic “Steamboat Bill, Jr.”.  The film was accompanied by local organist Dave Moreno on the Memorial Auditorium’s custom-designed Estey Municipal Organ.  “Steamboat Bill, Jr.” was filmed on the Sacramento River in 1927, the same year that the Memorial Auditorium opened.

The stately building is dedicated as a memorial and tribute to the Sacramento residents who gave their lives in service to our country.

During its heyday, the Memorial Auditorium was the only facility of its kind in the region. Over the years this large multi-purpose venue has hosted a diverse range of entertainment (concerts, sporting events, etc.).  It is also thought of fondly by those who exchanged their marriage vows on site – as well as the multiple generations whose graduation ceremonies (high school, college, law school, etc.) took place there.

I vividly recall my first visit to Memorial Auditorium to witness the graduation of a friend from McGeorge School of Law.  I was struck by the beauty of the building – inside and out.

The Memorial Auditorium was nominated to the National Register of Historic Places in 1977 – and it is easy to understand why.  The building has many unique architectural design elements.

The National Register of Historic Places Nomination Form, describing the architecture of Memorial Auditorium, states “The best collective label for the building may be southern European, Early Renaissance revival.”

The Nomination Form describes the building in detail. Among other interesting facts is that the site was originally donated to the city by John A. Sutter, founder and pre-Gold Rush empire builder in the Sacramento area.

Memorial Auditorium was closed for a decade (1986 to 1996) for safety reasons.  It was a great day for Sacramento when it reopened in 1996 after the grounds were excavated to repair foundation walls, among other things.

The most visible improvement to the building is the exterior lighting – added in 2008.  I find it to be an exceptionally beautiful sight when it is lit up at night. 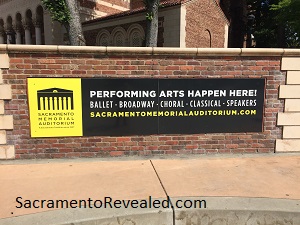 On Memorial Day, 2019, the City of Sacramento held an open house at the newly renovated Memorial Auditorium.  During a two hour period that morning the public had an opportunity to either take a volunteer-led guided tour or make their way around the facility on a self-guided tour to view the updates and enhancements to the building.

The $16.2 million renovation of the Memorial Auditorium is part of the C3 Project in which renovations will also be made to the Community Center Theatre and the Sacramento Convention Center.

During the renovation of the Community Center Theater, which will begin in June 2019, the Memorial Auditorium will host the events that would have otherwise been held at the Community Center Theatre.  I was therefore very interested to see the improvements to the Memorial Auditorium as a friend and I have long held season tickets to Broadway Sacramento. 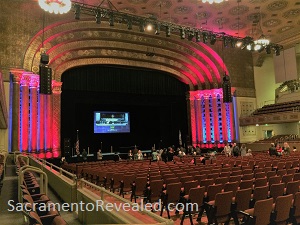 Enhancements include improvements made to the rigging for the lighting and a new sound system as well as improvements to the acoustics.  New comfortable padded chairs (I checked them out!) are lined up on the floor.  The chairs in the upper balcony have been refurbished, and the very top few rows feature the restored original wood seats.

To sum up, a key goal during the renovation was to maintain the historical integrity of the building – mission accomplished in my opinion!

Do you recall the first time you visited Memorial Auditorium?