(Last UPDATED 6/4/2021)  Description of and background on the Tower Bridge, an iconic Sacramento landmark.  The bridge spans the Sacramento River, linking the City of Sacramento and the City of West Sacramento in Yolo County.

The Tower Bridge, a vertical lift bridge, was built in 1934-1935.  The construction cost was $994,000.  The height of the two towers is 160 feet, and the distance between the lift towers is 186 feet.  The length of the lift, which weighs 500 tons, is 209 feet. When the draw is up there is 100 feet of vertical clearance above high water with a 172 foot wide navigation channel between the timber pier fenders.

A large crowd attended the dedication ceremony on December 15, 1935.  At the dedication ceremony the crowd witnessed the first raising of its lift span.  When it opened it had a single lane roadway with sidewalks on either side of a large center lane for trains.  The last train crossed the bridge in 1962, and the railroad tracks were removed in 1963.

In 1982, the Tower Bridge was added to the National Register of Historic Places (NRHP) (#82004845).  The NRHP Nomination Form provides detailed information on the Tower Bridge and includes the following (partial) statement of Exceptional Significance:

“The Tower Bridge is an outstanding example of the Moderne styling of the 1930’s applied to a utilitarian structure. The monumental, twin-towered structure is strongly reminiscent of contemporary Wellsian images of the gleeming, streamlined, towered city of the future. The application of the futuristic image which pervaded design during the 1930’s transformed an otherwise utilitarian structure into an outstanding expression of the social and architectural climate of the period.”

The Tower Bridge was previously part of U.S. Route 40.  Today the Tower Bridge carries cars, has a walkway for pedestrians, and is maintained by the State as part of State Route 275.  State Route 275 is the shortest highway in California, running from one end of the bridge to the other, a length of 738 feet.  The state relinquished the rest of the highway to the City of Sacramento on one side, and to the City of West Sacramento on the other more than a decade ago. 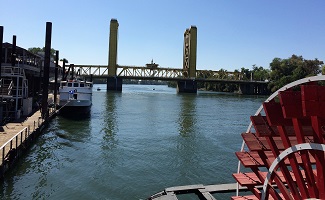 It is always a treat to be in Old Sacramento and to watch the middle section of the bridge raised to allow a large vessel or tall sailboat to pass.  A warning siren alerts cars and pedestrians, and a crossing barrier is activated to block traffic until it is safe to cross.

The bridge was painted gold in 2002 after a vote by Sacramento residents living within a 35-mile radius.  The color choices were all gold, green, gold and silver, burgundy, or silver and gold.  I recall the vote well as I voted for “green” and green lost.  It took me a while to get used to the newly painted gold (or goldenrod yellow as some would describe it) Tower Bridge.

To sum up, as I think about it in retrospect, I do not believe that a dark green would have showcased the bridge design elements anywhere near as well as does the gold.  So, it was a good thing that I was on the losing end of the vote in 2002.

Comments on the Sacramento Tower Bridge?

If you voted for your preferred color in 2002 – what color did you vote for?