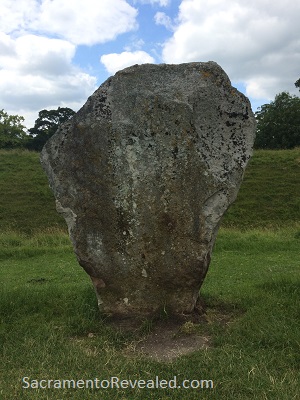 Description of a visit to Avebury Stone Circle and Henge, the largest stone circle in the world.  One in a series of Adventures in England blog posts.

It was Day 3 of the 2019 Megalithomania Mysteries of England Tour.  Hugh Newman of Megalithomania, our tour guide, arrived promptly that morning to pick up the members of our group.  We were headed to Avebury to visit the Avebury Stone Circle and Henge and related sites.

The small village of Avebury in Wilshire County is approximately 30 miles from Amesbury, the Mysteries of England Tour “home base”.

Hugh had arranged for us to meet up with Maria Wheatley, a local Avebury expert.  She is a second generation dowser, following in her father’s footsteps, and an author.

Maria was very knowledgeable, and she not only shared information about the site she also demonstrated dowsing and how dowsing could detect the earth energy of the stones.  She had also brought with her additional rods so that members of the group could try their hand at dowsing. 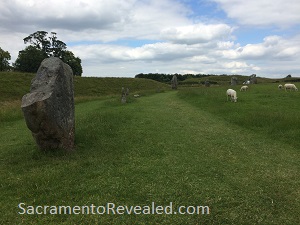 The Avebury Neolithic and Bronze Age landscape is a World Heritage Site, recognized as such in 1986 jointly with Stonehenge.  The Avebury Stone Circle(s) and henge is not only the largest stone circle in the world – but it is the only stone circle with a village built within it. I should also note that there is no charge to visit the site.

Within the outer stone circle are two smaller inner circles.  All the stones used are local sarsen stone.  Many of the stones of the three circles are missing, either buried or used in the construction of the stone walls and buildings of Avebury – but that does not lessen the impact of the site.

It was another beautiful day, a perfect day to tramp around in the fields to visit the stone circles.

Many ancient sites in England co-exist with agriculture, and this particular site is used for sheep grazing. There were not a great many sheep grazing when we arrived – but it soon became obvious that we needed to watch every step for sheep dung as we made our way through the fields to visit the stones!

Unlike Stonehenge, where you cannot touch the stones, at the Avebury Stone Circle(s) that is not an issue.  The stones are not as large as Stonehenge, but still very impressive, to say the least, as one considers that the stones were erected in prehistoric times.

Similar to other ancient sites, the stone circle is thought to have been used for ceremonial purposes.

What is a henge?

Wikipedia defines “henge” as including, as an essential characteristic, a ring-shaped bank and ditch, with the ditch inside that bank.  Henges are not considered to have served defensive purposes.

After we concluded our visit to the Avebury stone circles we stopped and strolled through the village of Avebury.  Avebury is a picturesque small village, with cute cottages lining the narrow road. Before we left Avebury our group visited a couple of shops that clearly catered to tourists and those of a mystical bent.

At one shop, a converted cottage, I took a quick look around and decided to settle myself outside on a bench to enjoy the shop’s beautiful garden.  The garden was a riot of color with a large variety of flowers of all shapes and sizes.

When members of our tour group emerged from the shop many were carrying bags containing their purchases.  Several members had purchased dowsing rods, all of which would see a lot of use for the remainder of our seven day tour.

Have you visited the Avebury Stone Circle and Henge?  What was your experience?