(Last UPDATED 5/18/2021) Description of a visit to the Cerne Abbas Giant (aka Cerne Giant).  How old is the Cerne Giant? See UPDATE below for the latest!

It was the second day of the 2019 Megalithomania Mysteries of England tour.  Among other sights we were going to view the Cerne Giant.  Hugh Newman of Megalithomania, our tour guide, picked us up in the van for the trip from Amesbury.

We all enjoyed the scenery as we drove through the rural countryside.  Rural roads in England are very narrow and at times are hemmed in by stone walls or trees and bushes.  I was glad to sit where I could not see the road directly in front of the van. In fact my seatmate, who was sitting next to the window, stated that without a doubt I was “better off not knowing”.

About the Cerne Giant

The Cerne Giant, England’s largest chalk hill figure, is located near the village of Cerne Abbas in Dorset County.  The nude male figure, with a large club in his right hand, stands 180 feet tall!  Its intended purpose and origin remains unknown. 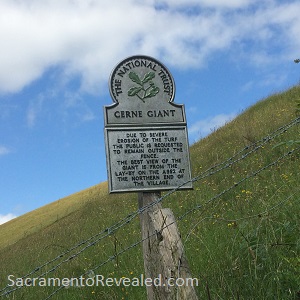 Upon arrival, we parked the van and hiked to the feet of the Cerne Giant.  Once there, Hugh  explained what was known or unknown about the chalk hill figure. Among other things, Hugh mentioned that the local folks have long believed that the Cerne Giant aids fertility.  He added that local couples have been known to, in the dark of night, make love while lying on the Cerne Giant’s “parts”.

The Cerne Giant is best seen from above, and Hugh had brought his drone.  We obediently waved as the drone approached our group and then he sent it way, way up above the Cerne Giant.

You can view the You Tube video here:  2019 Mysteries of England Tour – Cerne Giant   I am sitting on the end (on the right) of the members of our tour group.

And no, I was not being anti-social.  I had spotted a hole in the side of the hill and did not want to be sitting in front of it in case it was inhabited and the occupant decided to join the photo shoot.

(5/18/21)  After extensive study and analysis, experts were surprised to discover that the Cerne Abbas Giant likely dates to the late Saxon period (700 – 1100 AD), thus ruling out prehistoric or Roman origin.  Find all the details on the National Trust Cerne Abbas Giant webpage.

(7/10/20) According to a report by the BBC News, an analysis of snail shells found at the site of the Cerne Abbas Giant suggests the 180-foot-tall chalk drawing dates to the medieval period or later.

The remains of a particular species of tiny snails have been found in soil samples in the chalk outline of the figure.   The species is thought to have been accidentally introduced in England sometime during the 13th and 14th centuries.

The National Trust intends to scientifically determine a more exact age for the figure by analyzing soil samples collected from its feet and elbows.  The test results have been delayed due to the COVID-19 pandemic.  Stay tuned!

Comments on the Cerne Abbas Giant?

Have you visited the Cerne Giant site?  What would you add?