Description of a visit to the ruins of Cerne Abbey, founded in 987 A.D. by Benedictine monks.  The ruins are located in Cerne Abbas, Dorset County, England, not far from Giant Hill.  One in a series of Adventures in England blog posts.

It was another beautiful morning in Amesbury.  Several members of the 2019 Megalithomania Mysteries of England tour group commented to each other how lucky we had been weather-wise as we walked to Reeves, The Baker, a nearby shop.

The plan for the day was to stop for a picnic lunch in between a full day of sightseeing.  After picking up freshly made sandwiches, fruit, etc. at Reeves we headed back to the Antrobus Arms Hotel where the majority of our tour group were staying.  We were all ready to go when Hugh Newman of Megalithomania, our tour guide, pulled up in the van to pick us up.

Hugh had asked around for suggestions from friends as to a place in the vicinity of Cerne Abbas where we could picnic, and one friend had suggested Cerne Abbey.  Hugh had not been there previously so he did not know what to expect – but it turned out to be a special place.

Around midday we were all getting hungry. At the end of Cerne Abbey Road we parked near Abbey House (aka South Gate House).  The house is a privately owned dwelling on the site of what had been the monastery gatehouse.

Our group walked along the stone wall towards the rear of the house.  The wall had a box built into for donations for entry to the site.  The requested donation (honor system) was two pounds per person.

A paved stone area in the rear of the house led to a beautiful garden with several benches dotting the green, shaded lawn area.  Some of us settled ourselves on benches shaded by trees, while others made themselves comfortable on the grass.  The weather and location was perfect for an al fresco lunch.

The owners of the property and their cute little dog came out of the house as we were picnicking and bid some visitors goodbye.  After the visitors drove off the husband came over to chat – and we were really glad he did as we learned a lot from him about the property.

He and his wife had purchased the Abbey House some 40 years prior.  The property includes the Abbot’s Porch, built around 1500, which is all that is left of Cerne Abbey.  Among other things, he shared that he had researched the history of Cerne Abbey and had built and placed information boards underneath the Abbot’s Porch for the enjoyment of visitors.

We inquired about visiting the nearby spring, and he provided us directions asking only that we stay on the path as we made our way there.

Lunch finished, we walked around the garden area and had a close look at Abbott’s Porch.  One can only imagine what a magnificent building the Cerne Abbey must have been in its heyday!

After returning to California I looked into the history of Cerne Abbey.  The last Abbot of Cerne Abbey, Thomas Cordon, was elected to that post in 1524 upon the death of his predecessor.  He was accused by a monk of a variety of offenses and Henry VIII closed Cerne Abbey in 1539. 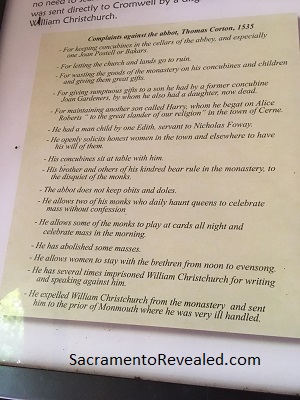 It is noteworthy that King Henry VIII’s Dissolution of the Monasteries took place between 1536-1541.  One has to wonder if the list of accusations against Abbot Cordon were true (all or in part), or if the accusations were used as an excuse to confiscate Cerne Abbey’s wealth.

After checking out the Abbot’s Porch, we walked past the cemetery to St. Augustine’s Well.  The spring is surrounded by trees, and I noted that various “offerings” (ribbons, trinkets, etc.) had been left by previous visitors.  Actually this is a common practice in England at sites viewed as special, magical or holy as we witnessed time and again during our week-long tour.

The true story behind St. Augustine’s Well?  Well, legends associated with the well vary – so there is no definitive answer to that question.  What I can say is that it certainly is a peaceful and beautiful spot – a perfect place to sit for a while, relax, and reflect on life.

We did not have time to do that, however, as it was time for us to get back on the road as we were trying to keep somewhat on schedule. After walking the short distance back to the van we climbed in, happy that we had the unexpected opportunity of visit Cerne Abbey.

Have you visited Cerne Abbey?  Do you have anything to add?