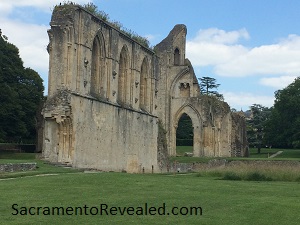 Description of a visit to the ruins of Glastonbury Abbey in Glastonbury, Somerset County, England.  One in a series of Adventures in England blog posts.

It was Day 4 of the Megalithomania 2019 Mysteries of England tour, and members of the tour group were all looking forward to what was to be a full day of adventure.  The plan that day included a visit Glastonbury Abbey and the nearby Chalice Well/Red Spring.  Our visit to Glastonbury Tor that same day is the subject of a separate blog post.

Hugh Newman of Megalithomania had arranged for a local expert on Glastonbury, Shaun Kirwan, to join us and share his knowledge of the area as well as the associated myths and legends – of which there are quite a few.

In the 7th Century the Saxons conquered the Somerset area.  King Ine of Wessex is said to have had built a stone church in Glastonbury which was later enlarged in the 10th Century by the then Abbot of Glastonbury.

After the Normans conquered England in 1066 they built additional buildings nearby the existing Saxon church.  By 1086, Glastonbury Abbey was the richest monastery in England.

Much of Glastonbury Abbey was destroyed by fire in 1184.  It was not until Christmas Day in 1213 when the monks consecrated the newly built Great Church.

Glastonbury Abbey fell victim to King Henry VIII’s Dissolution of the Monasteries.  It was dissolved in 1539, and Abbot Richard Whiting (or Whyting) was hanged on top of Glastonbury Tor.

After visiting the informative Abbey museum we ventured out onto the grounds accompanied by Shaun, who discussed what we were seeing and the legends and myths associated with the site.

Viewing the ruins of Glastonbury Abbey one gets a glimmer of how magnificent the compound must have been at its height.

The Lady Chapel, dedicated to the Virgin Mary, was built soon after the fire that destroyed most of the Abbey in 1184. It was built on the site of the old church. While the Lady Chapel is in ruin what remains, including decorative sculptures adorning the walls and portals, is most impressive.  It clearly had been a magnificent structure upon its completion. 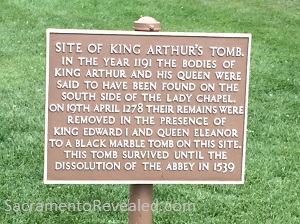 Glastonbury Abbey is closely identified with the legend of King Arthur and the Isle of Avalon.

In 1191, the monks of Glastonbury Abbey reportedly found the graves of King Arthur and Queen Guinevere in the cemetery near the Lady Chapel.  The bones of two bodies were removed and much later, in 1278, reburied in a marble tomb within the then completed Great Church.

As we viewed the site, Shaun shared that the monks at that time may well have concocted the story that the bones exhumed were those of King Arthur and his queen in order to encourage pilgrimage to the Abbey and raise funds for its rebuilding.

Joseph of Arimathea has been linked to Glastonbury, Christ and the Holy Grail.  One myth has Joseph building the first church, constructed of waddle, at Glastonbury.  Another version of the myth has Christ himself visiting Glastonbury with Joseph and helping to build the church.

According to the Gospels, Joseph of Arimathea was a wealthy follower of Christ who buried Christ’s body in his own tomb after the Crucifixion.  Joseph has been linked the Holy Grail (aka the Holy Chalice), the cup used at the Last Supper. Myths about Joseph and the Holy Grail include one in which he travelled to Britain and buried the Holy Grail in a secret place below Glastonbury Tor.  Legend has it that the Chalice Well sprung from the ground at that location.

Do these legends and myths have any basis in reality?  I think not.  There is no evidence that the legend of King Arthur is even based upon a historical figure. It seems certain that the monks of Glastonbury Abbey fabricated the story about finding the grave of King Arthur.  The tale about Joseph of Arimathea is even more far fetched.

After departing the grounds of Glastonbury Abbey our next stop was the Chalice Well/Red Spring.

Managed by the Chalice Well Trust, the Chalice Well/Red Spring and the surrounding grounds and gardens can best be described as serene and tranquil.  Pathways wind throughout the beautiful, well-maintained gardens and there are multiple water features.  Benches are scattered about providing ample places to meditate and reflect – or just enjoy the beauty of nature.

The high iron oxide content of the Red Spring gives its water a reddish hue. As its water is said to have healing properties, each member of our tour group filled a water bottle at the Lion’s Head Fountain. I tried a sip, but one sip was enough for me.

Nearby is a shallow concrete encased pool of water with seating shaded by trees surrounding it.  Here visitors can remove their shoes and wade into the (very) cold spring water.  I did not do so myself, but it was said to be very refreshing.

After leaving the Chalice Well Trust grounds we made our way to the next street over – Well House Lane.  On the left side of the lane is a pipe coming out from the stone wall with water flowing from the Red Spring.  On the right side of the lane, a pipe coming out of the wall of a Victorian-era well house flows with calcium-rich water from the White Spring.  The water of the White Spring is also said to have healing properties.  I tried a sip of White Spring water – it was different – but again one sip was enough.

As we said our goodbye and thanked Shaun he offered his business card.  His card identified his profession as a Geomancer.  It also explained that “Geomancy is the art of balancing, clearing & transforming detrimental etheric energies”.   I learn something new every day!

Finished doing our taste comparison, our tour group left Glastonbury and headed to our next stop – the triple stone circles of Stanton Drew in Avon.

Have you visited any of these three sites?  What would you add?