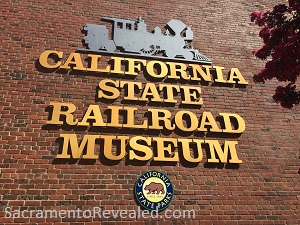 Description and review of the California State Railroad Museum, a world-class specialty museum. Plus, Celebrating the 150th Anniversary of the Transcontinental Railroad.

A friend and I recently spent an enjoyable afternoon visiting the California State Railroad Museum.   The museum is widely acknowledged as a world-class specialty museum.  You don’t have to be a fan of “all things railroad” to enjoy learning about the role railroads played in the history of our state and country.

I was particularly interested in seeing the exhibits at the California State Railroad Museum celebrating the 150th Anniversary of the Transcontinental Railroad.

I found the exhibit on the Chinese Railroad Workers’ Experience most interesting.  It is hard to imagine how the Chinese workers, comprising ninety percent of the labor force, were able to accomplish this monumental task using only hand tools and black powder.  Photographs and illustrations help one to somewhat comprehend the massive effort undertaken.  Check out the exhibit of some of the actual tools used – including the Star Drill! 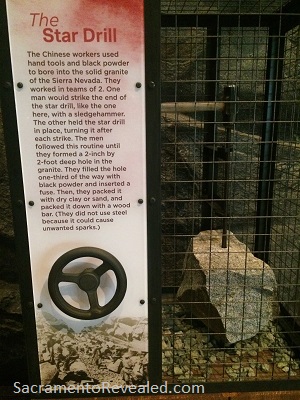 The Gold Spike Exhibit Gallery contains the gold spike used on May 10, 1869 to celebrate the completion of the first transcontinental railroad.  The museum acquired the gold spike in 2005.

Note:  You will have to go see the gold spike in person.  I was unable to take a decent picture due to the glare of the lights on the enclosure encasing the gold spike.

Among other interesting artifacts in the exhibit is the original 8×10 foot painting by Thomas Hill depicting the ceremony.   It is worth taking some time to look over the painting closely. 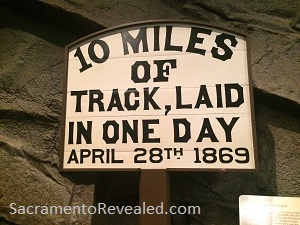 One of the newest permanent exhibits at the railroad museum “Farm-to-Fork: A Public History” was created by graduate students at California State University, Sacramento (aka Sacramento State).

Over the course of a semester, the students combed archives and photographs, and utilized a refrigerated car in the museum roundhouse to create the exhibit.  The exhibit uses illustrations, black and white photographs and mannequins to tell the story the region played in exporting to the rest of the country and beyond the bounty of our agricultural production.

The introduction of California fruits, vegetables and nuts to the rest of the country resulted in what is referred to as California’s Second Gold Rush – and the rest is history.

Celebrating the 150th Anniversary of the Transcontinental Railroad 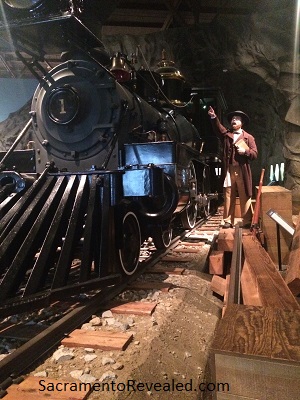 Sacramento celebrated the 150th Anniversary of the Transcontinental Railroad throughout 2019 in a variety of ways.

Among the events was Sesquicentennial Community Day, a day of free activities along the Old Sacramento Waterfront that included historic reenactments, picnics and complimentary train rides.

Also part of the celebration were also a series of lectures – the Gold Spike Lecture Series – as part of a partnership among the Sacramento History Museum, the California State Railroad Museum, the Center for Sacramento History and the Crocker Art Museum.  I attended two of the lectures and found them both interesting and informative.   You know the saying – “You don’t know what you don’t know.”  Let’s just say I learned a LOT.

2019 was the year that the Chinese railroad workers who labored on the Transcontinental Railroad were recognized and honored for their contributions.

It is no secret that Chinese railroad workers earned significantly less than their fellow co-workers, nor that they were often exploited and endured terrible living and working conditions.  In fact, it has been estimated that 500 to 1,000 Chinese workers died during construction of the Transcontinental Railroad.

In addition to recognition in the lecture series, and the California State Railroad Museum exhibit, a mural was created to honor their memory and acknowledge the role they played. 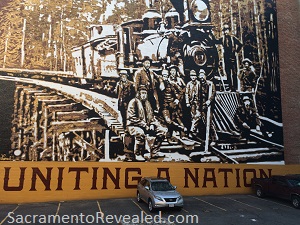 The mural is the work of well-known Sacramento artist Maren Conrad.  She created a large mural depicting Chinese railroad workers with the phrase “Uniting the Nation”.  The mural can be found on the side of the Elks Tower located at 11th and J Streets.  Check it out next time you are in the vicinity!

Comments on the California State Railroad Museum or the 150th Anniversary of the Transcontinental Railroad?

Comments on the California State Railroad Museum?  Did you attend any of the 150th Anniversary celebratory events?  What would you add?