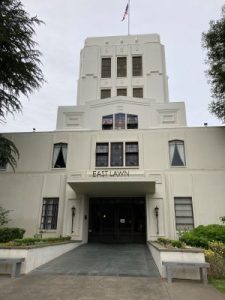 Description and review of a tour of the East Lawn Mausoleum in the East Sacramento East Lawn Memorial Park.

I was delighted to recently have the opportunity to take a tour of the beautiful East Lawn Mausoleum located in East Lawn Memorial Park.

Our guide was East Lawn Project Manager Craig Peterson, a long-time employee who has served in a variety of roles.  His obvious enjoyment in sharing the history of East Lawn and its inhabitants made the tour both entertaining and informative.

At the turn of the century, the 40-acre property upon which East Lawn was developed was a farm on the outskirts of Sacramento. The East Lawn Cemetery opened its gates in 1904.

A major advantage of its location was its elevation in flood prone Sacramento.  The Edwards Break Flood of 1904 flooded 10,000 acres in the Riverside and Pocket areas of Sacramento, causing extensive property damage.  Flood waters also washed through parts of the Old City Cemetery.  Many of the headboards were swept away and, in short, there was no place to bury the dead.

East Lawn opened the first crematory in Sacramento in 1910.  When it came time to embark on the next phase of the project, the building of a mausoleum, a problem surfaced.  When the East Lawn Cemetery applied to the city for a permit to build a mausoleum, they discovered that local developers had quietly had the property re-zoned residential!  By that time the property was no longer on the outskirts of town.

A very public fight ensued.  The matter was settled by a vote of the people who voted for an ordinance in favor of building the mausoleum.  The East Lawn Mausoleum was built in 1926. 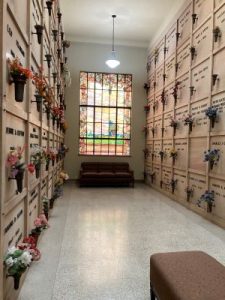 Around twenty of us had registered for the free tour, which is held periodically.  We entered the Main Building by ones and twos and were directed to the chapel to wait for our tour guide.

It was right around 10:00 a.m. when Craig Peterson arrived and introduced himself.  He shared some of his background and then proceeded to tell us some of what we were to see that day.

The focus of the tour was the interior of the Main Building and its additions.  This was my first time visiting the Mausoleum, and what little bit I had seen so far filled me with confidence that I was in for a treat!  I was not mistaken.

The East Lawn Mausoleum was built in the (modern at that time) art-deco style. It is an imposing and beautiful building situated in the middle of the property.

Additions to the building since it was first constructed include corridors of crypts and cremation niches.

Our tour included both the main building and its additions. Craig started our tour as we made our way from the chapel back down the hallway towards the main entrance.  The building is home to beautiful artifacts throughout, including original works of art, antique furniture, and 48 stained glass windows.  Everything is beautifully maintained.

The interior, including the grand staircase with its stunning stained-glass window on the top landing, brings to mind an opulent mansion – as opposed to a mausoleum.

Throughout the building one will find sofas, benches and chairs for visitors to rest and perhaps pause to remember a loved one.  I also noticed that there were numerous boxes of tissues scattered throughout. 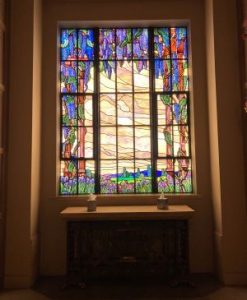 The Mausoleum has numerous striking stained-glass windows.  Craig discussed restoration efforts undertaken to date, as well as his research on the craftsmen who created these works of art as we made our way through the building.

The windows were designed and created by Clarence Todd and W.G. Pearson.  Todd, who had been associated with Tiffany & Company in New York, came to Sacramento to open Sacramento Art Glass Works in 1912.  Pearson owed the Pearson Art Glass Company in Portland, Oregon.

Craig also explained the creative process used to make the painted portions of the windows.

Some of the windows were created by artist Aimee Gorham (1883-1973) when she worked for the Pearson Glass Company. Craig pointed out her signature on a stained-glass window that had been uncovered when the window was carefully cleaned.

Efforts to restore and maintain the windows includes replacing broken and/or cracked glass and backing windows with a waterproof glass barrier on the exterior of the building.

Each of the additions to the original Main Building are different in a variety of ways.  For example, Craig pointed out both the differences in the ceiling height and the style and composition of the niches holding cremation urns.  It was very interesting to see the objects placed in some niches as they provide a glimpse into the life of its occupant.

East Lawn is the final resting place of many notable Sacramentans.   Among those buried there are actors, sports figures, politicians, soldiers, priests, Gypsy royalty  and prominent business leaders.

Long-time residents of Sacramento will recognize many of the names of those who reside at East Lawn.  For example:

We did not visit the grounds with the exception of the William Land Mausoleum (see below).  However, I thought it worth noting that East Lawn is also the final resting place of a number of largely unidentified pioneers who had been buried at New Helvetia, the burial ground for Sutter’s Fort.  The former burial site, located at Alhambra and J Streets, is now occupied by Sutter Middle School.

We finished the tour with a visit to the imposing William Land Mausoleum.   It is located not far from the front of the East Lawn Mausoleum building.  The marble structure is situated on the highest elevation point within the City of Sacramento.

Craig had a key, and has permission from the family to show the interior of the mausoleum.  He unlocked the beautiful heavy decorative metal doors, and small groups of us took turns admiring the interior stained glass, tiled mosaic floor and the ceiling of marble that was hewn to resemble finely crafted woodwork.

To sum up, when I looked at my watch, I was surprised to find that 1 ¾ hours has passed since the start of the tour!  Craig announced that he is working on a tour of the grounds and encouraged us to keep an eye on the East Lawn Memorial Park website for future announcements.  I certainly plan to do so.

Have you taken the East Lawn Mausoleum tour?  What would you add?