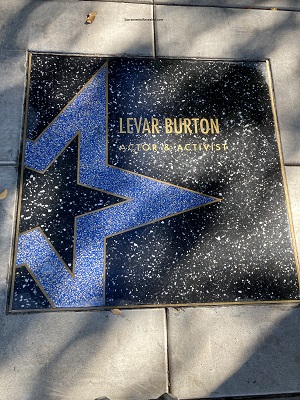 (UPDATED 5/5/2022) Description of some of the notable accomplishments of Sacramentan LeVar Burton, an actor, director and children’s television host.  NEW: See Update below.

It was recently reported in the news that LeVar Burton had been named the grand marshal of the 2022 Rose Parade in Pasadena.  The Rose Parade takes place annually on New Year’s Day.

The news got me thinking about writing a LeVar Burton “Notable Sacramentan’s” blog post.  Actually, the thought first occurred to me a bit earlier during the Jeopardy game show host speculation, but I did not follow through at the time.

Burton first came to my attention when he starred in the award-winning miniseries “Roots” (1977).  Burton played the main character Kunte Kinte. Like many fans of the miniseries, I was glued to the TV as each episode unfolded.  In fact, I recall planning other activities to avoid the time it was scheduled to air!

Afterwards, Burton played one of my favorite characters on Star Trek: Next Generation – Lt. Commander Geordi La Forge.  I have been a Trekkie from the first episode of the original Star Trek.

Just how big a Trekkie? Back in the day I attended a three-day Star Trek conference in Detroit – which was awesome.  One year, not all that long ago, my daughter gave me a very thoughtful Christmas gift – a multi-disk set of the complete original Star Trek series (remastered). Needless to say, I still am a fan of the franchise.  Once a Trekkie, always a Trekkie.

I then lost sight of Burton.  Burton was hosting the long-running, award-winning children’s series “Reading Rainbow” on PBS.  He was also an executive producer of the show.

Burton has credited his mother, an English teacher and social worker, for his interest in literacy.  Reading Rainbow has been acclaimed for fostering a love of reading in children.

No doubt many parents are very familiar with Burton in this role, but I did not have a child of the right age during this timeframe so I was not. So that is how I “lost sight” of Burton during this period.

In 2016, Burton was among the first five inductees awarded a “star” on Sacramento’s Walk of Stars.  His star can be found at 18th & L Street in Midtown Sacramento.

In July of 2019, Burton returned to the Meadowview neighborhood where he was raised for the official dedication of LeVar Burton Park.  The newly renamed park was previously known as Richfield Park.

Born overseas on a military base, Burton moved to Sacramento when he was a small child, around 3 years old.  After high school he attended the University of Southern California where he studied drama on a scholarship.  The rest is history.

While he and his family live in Southern California, he calls Sacramento his “hometown” and returns “home” to visit his mother and younger sister who still reside here.

(5/5/2022)  The National Academy of Television Arts & Sciences recently announced that LeVar Burton will be awarded the Lifetime Achievement In Children’s Television Award at the First Annual Children’s & Family Emmy Awards.  The award ceremony will take place on December 11, 2022 in Los Angeles.

Any comments on LeVar Burton from anyone who knew him as he was growing up in Sacramento and/or who have stayed in touch?