The business venture never made money.  The Pony Express went out of business two days after the transcontinental telegraph connected California to the rest of the nation on October 24, 1861. 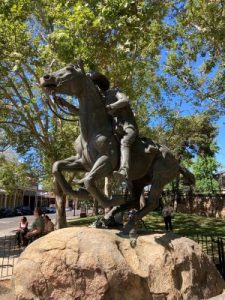 Every June, members of the National Pony Express Association (NPEA) recreate the Pony Express ride between St. Joseph, Missouri and Sacramento, California.   This year the re-ride ended in Sacramento.

The re-ride follows the Pony Express National Historic Trail (Trail).  The Trail makes its way through eight states (Missouri, Kansas, Nebraska, Colorado, Wyoming, Utah, Nevada, and California).  Hundreds of riders cover the almost 2,000 miles over ten days, riding 24 hours a day until the mail is delivered to its destination.

The B.F Hastings Bank Building, on the southwest corner of 2nd and J Streets, is the western terminus of the Pony Express.  The building was declared a National Historic Landmark in 1966.

This year the rider of the last leg of the ride to Sacramento was scheduled to arrive June 16th.  I noted the event on my calendar and planned to attend.  The anticipated time of arrival in Old Sacramento was 4:30 p.m., so I decided to arrive around 3:30 p.m. that afternoon not knowing what to expect. 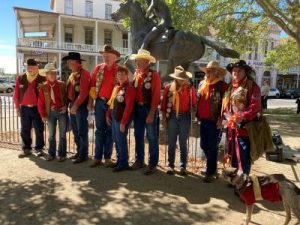 A small group of NPEA members from several states (California, Nevada, Kansas) had already staked out a good spot in the shade nearby the pony express statue at 2nd & J Street.

I likewise found myself a bit of the shade to wait.  While waiting I had the opportunity to chat with a a member of NPEA who was circulating to pass out informational brochures and answer questions.  Other spectators drifted in until a small crowd had gathered to await the arrival of the rider.  Cindy, the rider of the last leg, had made good time and reached the endpoint a few minutes early!

As Cindy and her horse rode in, and during the time it took for the horse to settle down a bit, the President of the California Division of NPEA shared some of the history of the Pony Express and described the Mochila used to transport letters.

The Mochila – Then & Now

A leather blanket type square, the mochila has four pockets (cantinas), one sewn in each corner to carry letters.  The mochila used today is designed to carry a greater number of letters than the mochila of the past.  Both then and now, the design of the mochila allows for the easy transfer of the mochila containing the mail to another horse. 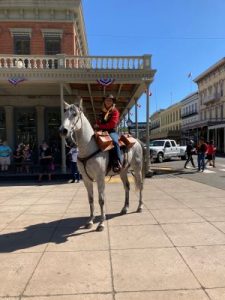 When the horse had settled down, the cantinas were unlocked and the tightly bound packets of letters removed from each pouch.  Each packet was wrapped in plastic and what appeared to me to be duct tape.  The protective wrapping is needed to protect the letters from both dampness and friction.

The packets were taken to a nearby table where they were unwrapped.  Each envelope was then hand stamped with a special U.S. Post Office cancellation.  The Sacramento Postmaster was present to accept the mail delivery.

Commemorative letters are sold by NPEA in advance of each ride for $5.00 each, like the mail of 1860.  The letters consist of a special designed envelope and an enclosed vignette, which highlights an historical event, site or person of the Pony Express.  Find out more on the NPEA website.

To sum up, next June the Pony Express Re-Ride will start in Sacramento and head eastward to St. Joseph, Missouri.  Keep an eye on the NPEA website for details if you would like to see the rider of the first leg start the journey eastward, or catch a rider along the way at one of the exchange points.

Comments on the Pony Express Re-Ride?

Have you attended either the departure or arrival of the Pony Express Re-Ride in Sacramento?  What was your experience?