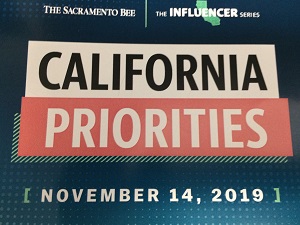 The Sacramento Bee Influencer Series of opinion articles, and the annual California Priorities event, appear to be part of a value-added strategy to make the Sacramento Bee more relevant – and worthy of community support.

The free event was again held at the Sophia, home of the B Street Theatre. Like last year, I found the topics and speakers both interesting and informative.  It is always helpful to hear where different sides on an issue are coming from.

I arrived at 8:30 a.m. and had time to have a cup of coffee before I entered the larger of the two theaters (i.e. the Children’s Theatre) to find a seat.

The back and forth was civil as the two sides discussed the issues involved. Something I had not known, as I am no longer part of the Capitol scene since retiring, is that the Realtors has formed a unit within their organization to sue local governments whose planning efforts they find deficient.  My only comment on that – I am not a fan of what sometimes seems to be a favorite pastime in California.

I was particularly interested to hear the discussion on Proposition 13.  Changes to the state’s property tax law have been a topic of discussion since the initiative passed in 1978.  Note:  I have a personal interest in the topic as I purchased my home in 1979.

An initiative to create a split-roll system (currently both residential and business properties are taxed the same) will appear on the 2020 ballot.  If passed, the proposed initiative would increase property taxes on business property.  One of the selling points – the increased taxes collected would help fund the state’s public schools.

There is no doubt the split-roll initiative will be hotly contested – something California voters can look forward to (or not)!

Tony Bizjak, the Transportation Reporter for the Sacramento Bee moderated the panel on transportation.

Joining him on the stage were Carl Guardino, President and CEO of the Silicon Valley Leadership Group; Bernadette Del Chiaro, Executive Director of the California Solar and Storage Association; and, Cesar Diaz, the Legislative and Political Director at the State Building and Construction Trades Council.

A variety of transportation related issues were part of the discussion including the need for mass transit.  Transportation is certainly very important in the state – but I found this of the least interest that morning.

After the last panel and closing comments, attendees filed out into the lobby and helped themselves to the box lunches provided.  An interesting morning and lunch – definitely value added!

My major takeaway from the morning of policy discussion will come as no surprise to many.  The solution to the state’s housing, school funding and transportation needs is new and/or increased funding and/or policy changes that will result in increased costs – with the California taxpayer ultimately footing the bill.

As a 30+ year subscriber to the Sacramento Bee, and someone who likes to have something tangible in my hands as I drink my morning coffee, I finally gave up the ghost this year.  The most recent price increase was the last straw (although I have been telling myself that with each rate increase for the last several years).

I now subscribe to the Sacramento Bee eEdition – and it is just not the same sitting at the breakfast nook table in the morning with my coffee and laptop.