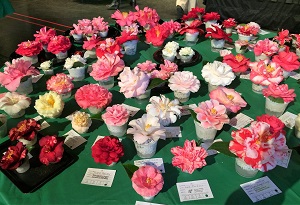 (Last UPDATED 2/22/2022) The Camellia Society has announced that the annual Sacramento Camellia Show will take place on March 5 and 6th in 2022.

Description and review of  the annual Sacramento Camellia Show, a long-time Sacramento tradition.

The Camellia Society of Sacramento (Society) hosts the free event.  It is the country’s largest and oldest flower show featuring camellias.  The show furthers the goal of the Society to develop a community interest in camellias.

I stopped by on Sunday, the last day of the show.  The crowd appeared somewhat sparse – but then Memorial Auditorium is quite large.  Additionally, people were coming and going throughout the day.

There were hundreds of camellias on display, trophy tables featuring the winning blooms, a photo contest, a plant sale, flower arrangements and a “paint in”, among other things.

The Society has a great website including information on the culture of camellia’s and other resources.  Do you have camellias – but don’t know what type?   The website has pictures to help you ID your particular camellia bush.

According to the Society website, the first camellia show was held in 1924 at David Lubin School in East Sacramento.  Later, as the event increased in size, the show was moved to the Memorial Auditorium where it has been ever since.

In 1941, Sacramento adopted the camellia as the city’s official flower, and the Society was established in 1943.  The Society made a big push in 1950 during Camellia Week to encourage Sacramento residents to plant camellias.  Judging by the number of camellia bushes I still see throughout Sacramento the effort was clearly successful.

The Society was fundamental to the planting of camellia groves in Capitol Park, William Land Park, and McKinley Park.  Many of these camellias are heirloom varieties and are no longer available commercially.

I recall in the last year or so reading about the camellia that was near the entrance of the recently demolished Sutter Memorial Hospital (Sacramento’s “baby” hospital).  The tree-sized heritage camellia was gently dug up and relocated temporarily to a nearby nursery.  It will be replanted in the new Sutter Park housing development that will be built on the site.  Donated to the hospital when it opened in 1937, the camellia bush was already quite large at the time and it is believed to be the oldest living camellia in Sacramento.

Over the intervening years the interest in camellias has had its ups and downs.  According to the Society website the funding for the Camellia Festival dwindled, as did the Festival, after the passage of Proposition 13 in 1978.  The Camellia Festival was last held in 1993.

After visiting the Sacramento Camellia Show this year, I am really glad that it remains an annual event in Sacramento.  It is truly part of Sacramento’s history.

Comments on the Sacramento Camellia Show?

Did you attend the Sacramento Camellia Show this year, or have you attended it in the past?  What was your experience?