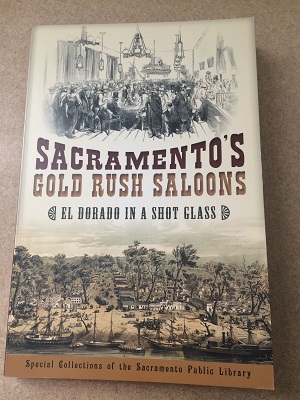 (UPDATED 1/21/2020) Description of a presentation given by James Scott of the Sacramento Public Library’s Sacramento Room.  The topic – Sacramento’s Gold Rush Saloons.  Can you guess the location of Sacramento’s first saloon?

The 2019 Fall Semester of the Renaissance Society started this month, and I once again signed up for the A Cook’s Tour class.  The topic this semester is “Art of the Libation”.

The first class of the semester was held on a recent evening at the Colonial Heights Library.  The speaker was James Scott, librarian and archivist for the Sacramento Room at the Sacramento Public Library (main branch).

The source material for the talk was Sacramento’s Gold Rush Saloons – El Dorado In A Shot Glass, a book that covers the early saloon culture of Sacramento.  The book content was generated by Sacramento Public Library staff.

Scott accompanied his talk with a power-point presentation with photos, drawings, lithographs, paintings, etc. of the time period.  The visuals provided a fascinating look back in time as well as insights as to what it was like to live in that era.

After James Marshall discovered gold in 1848 the Sacramento area experienced rapid growth. In addition to the influx of 49’ers heading up into the hills to try their luck, merchants of all stripes converged upon Sacramento to service the miners (aka “mining the miners”).

Sacramento was home to numerous saloons which served multiple purposes – a place to drink and gamble and much more (eatery, hotel, a place to bathe, dance hall, bordello, barbershop, social hall, etc.).

The first generation of rough saloons was housed in tents.  Later generations of saloons were housed in buildings constructed of wood and brick – some of which were quite posh.

Scott’s presentation also included stories about the people who lived in Sacramento during that era.  Thanks to accounts published in, for example, The Sacramento Transcript, Placer Times and later the Union their stories unfolded.  As one might expect, the stories included accounts of gun fights, murder, mob justice, etc.

During this time men greatly outnumbered women, but not all of the saloons were owned and run by men – there were also a number of women proprietors.  Some of the later saloons also accommodated women patrons in a separate room (aka the “ladies’ ordinary”) with its own entrance.

One statistic shared that I thought quite interesting – “…women are five times more likely to have violence perpetrated against them in the twenty-first century than during the Gold Rush era”.

Other topics covered that evening included the establishment of a thriving network of breweries, and the first appearance of locally produced wine in a Sacramento saloon.

Scott managed to cover a lot of territory before his talk concluded.  Afterwards I purchased a copy of Sacramento’s Gold Rush Saloons – El Dorado In A Shot Glass.  I was glad to do so, knowing that the proceeds of the sale ($20) benefit the Sacramento Public Library.

Interested in learning more?  Sacramento’s Gold Rush Saloons – El Dorado In A Shot Glass is available from the library as an eBbook or check your local library for a printed copy.  It is also available on Amazon for $19.99.

Back to the original question – Can you guess the location of Sacramento’s first saloon?  The earliest reports point to Sutter’s Fort as the region’s first place of gaming and drink!