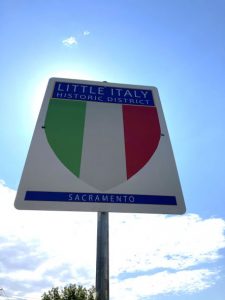 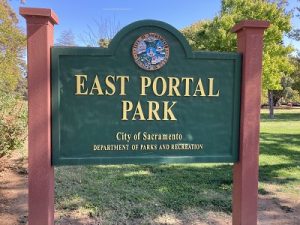 A small event to celebrate the creation of the new historical district was held the second week of October.  The event took place at the East Portal Bocce Club in East Portal Park.  East Portal Park is in the heart of the Little Italy Historical District. 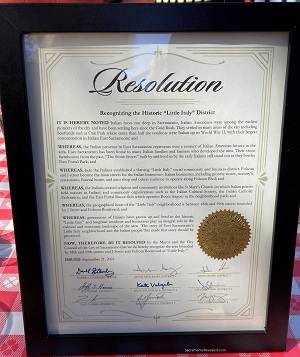 Afterwards, attendees were entertained by dancers in traditional dress from the various regions in Italy.

I attended the celebration as one of several representatives of the East Sacramento Improvement Association (ESIA), the neighborhood association.   The ESIA had supported the adoption of the Little Italy Historical District by the Sacramento City Council.

After the presentations and entertainment attendees enjoyed a buffet lunch. Darrell Corti of Corti Brothers donated both wine and raviolis to the buffet that also included salad, pizza and cake.

Attendees were encouraged to vote for their favorite of three designs for the Little Italy banners that you will be seeing around the new district soon. 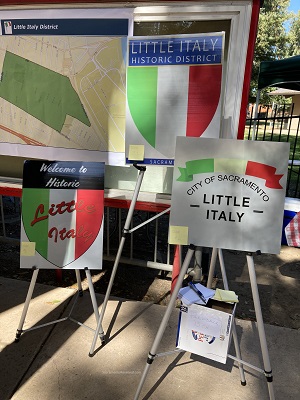 To sum up, it is the goal of the organizers of the new historical district to hold an annual Italian Festival in East Sacramento.  I am very much looking forward to the addition of a new annual event in the neighborhood!

A Bit About Italian Roots in Sacramento

(The following is a condensed version of select facts from an Italian Cultural Society newsletter article titled Claiming Our Heritage: Little Italy in Sacramento.)

Italians have been settling in Sacramento since the Gold Rush.  Italian immigrants were concentrated along the City’s Embarcadero between 1850-1870 and later in the early 20th Century there were concentrations in Southside, Oak Park, Land Park, Midtown, and East Sacramento.

Italian businesses of all types were established in the historic Little Italy district to serve the Italian community.  Many of these businesses still dot the neighborhood.

(8/10/2022)  I recently noted that the signage is now in place for Sacramento’s Little Italy Historical District and added a photo of the chosen signage.

What are your thoughts about the designation of a Little Italy Historical District in East Sacramento?  An annual Italian Festival?