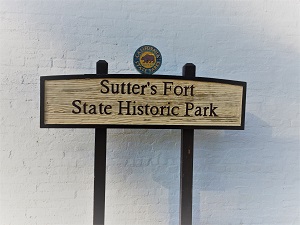 The 20th Annual Sacramento Museum Day was on an unusually warm day for this time of year.  I planned to take advantage of the free (or reduced) price admission to visit one or two Sacramento museums.  The beautiful spring-like weather tipped the scale.  I set out that morning to visit Sutter’s Fort State Historical Park and the California State Indian Museum located on the same grounds.

Sutter’s Fort State Historic Park is located between K and L Streets and 26th and 28th Streets in Midtown Sacramento.

A Bit of History…

Prior to settling in the region John Augustus Sutter, a Swiss-German immigrant,  secured permission from the Mexican provincial governor to establish a settlement east of Yerba Buena (San Francisco).  He received a 76 square-mile Mexican land grant, land that was inhabited by Native Indians.

Sutter arrived in what is now Sacramento in the fall of 1839.  With the help of workers he brought with him he built Sutter’s Fort.  He originally named his land grant New Helvetia (New Switzerland).   Sutter’s Fort was built with walls that were 2 ½ feet thick and 15 to 18 feet in height.

John Sutter prospered, and at one point in time he owned more than 150,000 acres of crop and range land.  Sutter’s Fort served as an agricultural and trade hub during what was a pivotal point in California’s history.

At the outbreak of the Mexican War in 1846 the United States seized control of California.

The discovery of gold in 1848 led to the collapse of John Sutter’s fortune.  Shortly before the war’s end carpenter John Marshall, while building a sawmill (Sutter’s Mill) on the American River, discovered gold in Coloma.

As a result, once word of the discovery was out, a flood of humanity headed to the goldfields to seek their fortunes.  Among those seeking their fortunes were Sutter’s workers.  The horde of fortune hunters helped themselves to the bounty of his lands – destroying crops and butchering his cattle.

Subsequently, Sutter’s Fort fell into disrepair.  By the 1850’s all that was left standing was the central building, a two-story structure built of adobe and oak between 1841 and 1843.

Sutter was bankrupt, and he spent the remainder of his life unsuccessfully seeking compensation from the state and federal governments for his losses.

The original restoration and reconstruction of Sutter’s Fort was completed in 1893.  The work was thanks in large part to the efforts of the Native Sons of the Golden West.   Sutter’s Fort was donated to the State of California and became a part of the California State Park System in 1947.

Sutter’s Fort was restored to what had been its 1846 appearance.  Furnishing, etc. are of the same period.

After that, additional restoration of Sutter’s Fort was undertaken after 2000.  This included restoration of the exterior walls, repair/replacement of the east and south gates, seismic stabilization of the historic Central Building and installation of lighting for the interior courtyards.

Visiting Sutter’s Fort State Historic Park is both interesting and educational. When you enter the East Gate be sure to pick up the map of the interior courtyard that identifies the rooms/areas you will see on your self-guided tour.  Many of the rooms have motion activated recordings that explain what you are viewing and provide an historical context (1839-1850).

During my visit on Sacramento Museum Day 2018 there were a number of volunteer reenactors dressed in period costume who were available to answer questions and provide additional information.  I found them to be all very knowledgeable.

In the interior courtyard you will see several fire pits, as well as a Beehive Oven.  Along the inside perimeter of the courtyard you can view various “rooms” including a weaving room, bakery, kitchen, distillery, carpenter shop, Vaquero room, gunsmith shop, blacksmith shop, candle shop, period trade store and cooper shop.

The South Gate (facing L Street) is guarded by gun platform’s on either side.  It was in front of the South Gate that the firing of a black-powder musket was demonstrated that morning.

In the original central building across from the South Gate you can view Sutter’s Office, the Doctor’s Office and Clerk’s Office, as well as the Parlor and Dining Room.

There is so much history associated with Sutter’s Fort State Historic Park!   What important facts would you add?