You are here: Home / Odds & Ends / The First Camellia 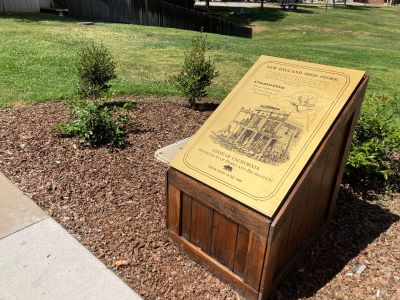 The story behind the first camellia imported into the state of California by James L.L.F. Warren.  Colonel Warren is also known as the “Father of California Agriculture”.

A recent addition is the Old Sacramento State Historic Park is a small camellia garden.  The garden surrounds a commemorative plaque that marks what had been the location of the New England Seed Store.  The plaque was dedicated in 1989.  The garden was planted by the California Department of Parks and Recreation. 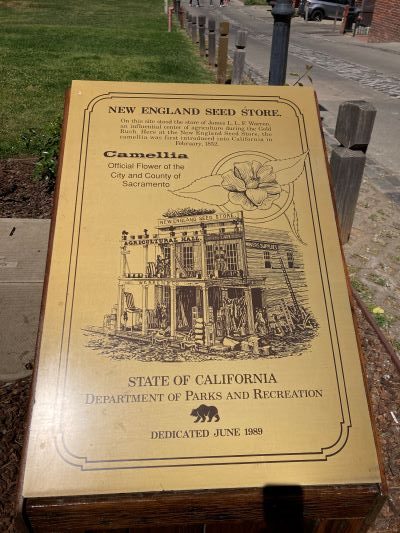 On this site stood the store of James L.L.F. Warren, an influential center of agriculture during the Gold Rush.  Here at the New England Seed Store, the camellia was first introduced into California in February 1852.

Warren had a life-long interest in horticulture. He was also a successful businessman.  He founded both a dry goods business and a horticultural nursery and exhibition hall/sales outlet in Boston.

The United States acquired California in 1848.  That same year gold was discovered at Sutter’s Mill.

Warren, 44, arrived in San Francisco in August 1849. Later that same year, he founded a general provisioning business in Sacramento.  The main focus of the business was the sales of fruit trees, seeds and agricultural equipment.

In 1852, Warren organized the first California State Fair.  Afterwards he took the lead in establishing the California Agricultural Society.

Warren was commissioned in 1855 as a Colonel, and was thereafter widely known as Colonel Warren.

Above all, among his other activities, Warren founded and was editor of the primary agricultural publication in the West – California Farmer and Journal of Useful Sciences (as it was originally named).  The first issue of California Farmer appeared in January 1854.

Comments on The First Camellia?

Have you noticed the New England Seed Store marker previously when visiting the Old Sacramento Waterfront?  Check it out the next time you are there.